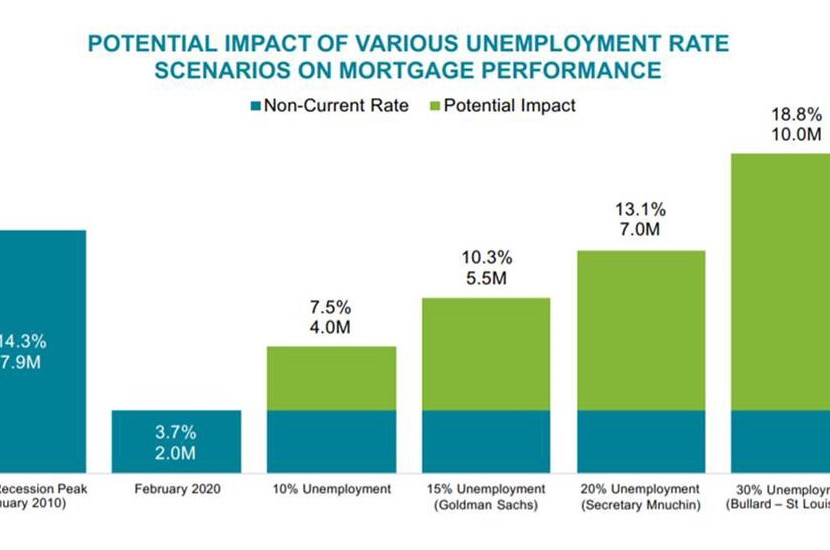 Leading up to the coronavirus outbreak, said Black Knight, Jacksonville, Fla., the vast majority of mortgage performance metrics were at or near record levels. Now, says Black Knight Data & Analytics President Ben Graboske, the mortgage market has been turned upside down.

“Trying to gauge the impact of COVID-19 on mortgage performance is as much an art right now as a science,” Graboske said. “The fact is that there is no true point of comparison in the nation’s recent history for analysts to model against.”

To wit, according to the monthly Black Knight Mortgage Monitor:

–While these historically low levels of past due mortgages make for a strong foundation leading up to the effects of COVID-19, they also mean that default servicing staff had been greatly reduced in recent years, compounding the challenge that servicers face in managing a wave of new forbearance and deferral requests.

–Nearly 17 million Americans have filed for unemployment in the weeks since COVID-19 was labeled a pandemic. Since UE has historically been a significant driver of mortgage performance, Black Knight’s Applied Financial Technology modeling team looked at various scenarios in an attempt to quantify the potential default risk of rising unemployment.

–Using the Great Recession as a point of comparison, the AFT team found that at 10% unemployment, the industry could expect two million new mortgage delinquencies, for a total of 4 million delinquencies and a national noncurrent rate of 7.5%. If unemployment climbs to the 15%recently projected by Goldman Sachs, it’s possible to see 5.5million past-due mortgages. Should UE reach the 30% projected by the Federal Reserve Bank of St. Louis, the non-current rate could spike to nearly 19%, surpassing what was seen during the Great Recession, with 10 million homeowners past due on their mortgages.

“The various forbearance programs being offered to borrowers via the recently passed CARES Act, as well as via individual agencies and mortgage servicers, are a key difference today,” Graboske said.

Black Knight said mortgage performance in the wake of natural disasters gives an idea of how well such programs have worked to help keep people in their homes. Pointing to the effectiveness of forbearance programs in a time of crisis, of the more than 140,000 seriously delinquent mortgages caused by the 2017 hurricane season, just 1% of homes were lost to foreclosure or short sale two years after the storms. Although, should financial disruptions become more long-term, additional assistance programs may become necessary.

“Of course, a surge of forbearance requests brings its own challenges, both operational and financial,” Graboske said. “Mortgage servicers are already being inundated with such requests, and those without the proper technology solutions or staffing levels in place will be hard-pressed to manage the situation. Likewise, servicers still need to pay principal and interest advances to federally backed securities holders, even if borrowers are granted deferments on paying their mortgages. If even just 5% of homeowners with GSE- or Ginnie Mae-securitized mortgages seek forbearance, those costs would be more than $2.1 billion per month. At 10%, the monthly cost owed to securities holders would jump to $4.2 billion and at 20% to $8.48 billion. While Ginnie Mae has announced a pass-through assistance program through which it will advance principal and interest payments to investors on behalf of servicers, at present there is no such program in place for mortgages backed by the GSEs. This remains a very fluid situation all around.”

The report can be accessed at https://www.blackknightinc.com/data-reports/.