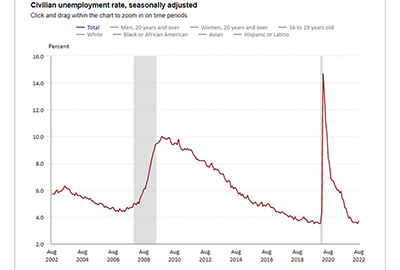 “The August jobs report revealed that while the labor market remains quite strong, with employment growth still above a sustainable pace; however, that pace is slowing,” said Mike Fratantoni, Chief Economist with the Mortgage Bankers Association. “Wage growth is still strong, with average hourly earnings up 5.2 percent compared to a year ago. The increase in the unemployment rate largely reflects more workers entering the workforce. The labor force participation rate remains 1 percent below pre-pandemic levels, but the increase is positive, as labor supply constraints have impacted several segments of the economy.”

Fratantoni noted job growth was steady across most sectors. “Coupled with other recent readings, these data indicate an economy that is still growing, but perhaps at an inflection point,” he said. “With this in mind, we expect that the Federal Reserve will stay the course with further rate hikes at upcoming meetings.”

Fratantoni said the housing market is “reeling from the hit to affordability from the spike in mortgage rates and much higher home prices. While these data don’t promise any near-term relief on rates, the strong job market will continue to support housing demand as household incomes continue to grow at a brisk pace,” he said.

Odeta Kushi, Deputy Chief Economist with First American Financial Corp., Santa Ana, Calif., noted the prime-age labor force participation rate increased from 82.4% to 82.8%, reaching its highest point since right before the pandemic hit in February 2020, “which signals that people are returning to the labor force.”

“And they’re returning to a still strong labor market,” Kushi said. “More workers in the labor force could help to narrow the gap between labor demand supply, and ultimately slow the pace of wage growth.”

“The big gains this month came from specialty trade contractors, both residential and non-residential,” Kushi said. “This subsector consists of employers whose primary activity is performing specific activities, such as pouring concrete, site preparation, plumbing, painting and electrical work. While builder confidence fell again in August due to the slowing housing market and ongoing supply-side headwinds, multi-family starts were up 17% year over year in July and homeowners who are rate-locked in may choose to remodel instead of move. You need more hammers at work to build and remodel homes.”

Sarah House, Senior Economist with Wells Fargo Economics, Charlotte, N.C., said the August jobs report was “weaker in the best way possible as far as the Fed is concerned, and may be just what the inflation doctor ordered.”

“Today’s data in isolation tilt the scales toward a 50 bps hike at the FOMC’s September meeting, but does not on its own settle the matter,” House said. “While the August jobs report keeps hope alive that the Fed may be able to pull off the elusive soft-landing, there remains significant work ahead in quelling the inflation pressures coming from the labor market.”

House added the slower jobs growth pace “marks a downshift from the downwardly revised 402K average recorded the prior three months, but is nonetheless a robust gain in its own right.”