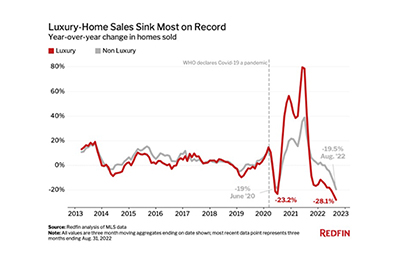 The drop represents the biggest decline since at least 2012, eclipsing the 23.2% plunge seen when the Coronavirus pandemic brought the housing market to a near standstill more than two years ago.

Sales of non-luxury homes also fell the most on record, decreasing 19.5% during the past three months, Redfin said. That slightly outpaced the 19% decline during the three months ending June 30, 2020.

The data firm said rising interest rates, inflation, a tepid stock market and economic uncertainty worked together to cause luxury buyers to back off. The average 30-year fixed-rate mortgage rate eclipsed 6% last week–the highest level since 2008–and the Federal Reserve on Wednesday voted to increase the federal funds rate an additional 75 basis points.

“High-end-house hunters are getting sticker shock when they see the impact of rising mortgage rates on paper,” said Daryl Fairweather, Chief Economist with Redfin. “For a luxury buyer, a higher interest rate can equate to a monthly housing bill that’s thousands of dollars more expensive.”

Fairweather noted someone who was in the market for a $1.5 million home last year may now have a maximum budget of $800,000 due to higher mortgage rates. “Luxury goods are often the first thing to get cut when uncertain times force people to reexamine their finances,” she said.

California markets led the drop in high-end-home sales. In Oakland, luxury-home sales plunged more than 63% year-over-year during the three months ending Aug. 31, the largest decline among the 50 largest U.S. cities. San Jose and San Diego also experienced decreases exceeding 55%. “These markets have something else in common: they’ve seen larger declines in luxury listings than anywhere else in the country as sellers have backed off in response to ebbing demand,” the report said. “This has exacerbated the decline in home sales; when there are fewer homes hitting the market, there are fewer homes that can be sold.”

Redfin reported luxury home prices are growing at half the pace they were a year ago. The median sale price of luxury homes rose 10.5% year-over-year to $1.1 million during the three months ending Aug. 31, compared with an annual increase of 20.3% a year earlier.

“Price growth in the luxury market is also likely decelerating in part because the supply crunch is easing overall, which means house hunters have more options to choose from and less competition,” Redfin said. The number of luxury homes for sale fell 1.9% year-over-year to less than 170,000 during the three months ending Aug. 31. Luxury home supply is still down on a year-over-year basis, but has increased from the start of the year, the report said. The number of luxury homes on the market is up 39.2% from a record low of roughly 121,000 during the three months ending Feb. 28.