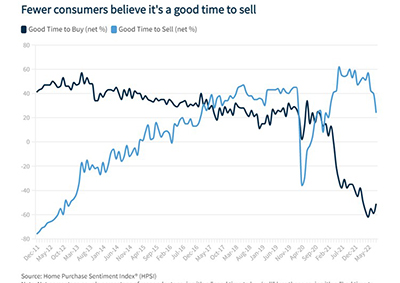 The Index decreased by 0.8 points in August to 62.0. Despite the relatively small aggregate change, the HPSI experienced significant volatility among four of its six components, including those measuring consumer perceptions of homebuying and home-selling conditions, as well as expectations regarding the future direction of home prices and mortgage rates.

Month over month, consumers reported that home-selling conditions have worsened – although that component remains strongly positive on net. Consumers also reported that homebuying conditions have improved, but 73% continue to report that it’s a “bad time to buy.” For the first time since the start of the pandemic, consumers are neutral, on net, about the future path of home prices, with an increasing share this month reporting that prices will decline. Meanwhile, a greater share reported the expectation that mortgage rates will decline, even though a majority continue to believe that mortgage rates will go up over the next 12 months. Year over year, the full index is down 13.7 points.

“The share of consumers expecting home prices to go down over the next year increased substantially in August. Accompanying this, HPSI respondents reported a significant decrease in home-selling sentiment,” said Doug Duncan, Fannie Mae Senior Vice President and Chief Economist. “We also observed a large decline in consumers reporting high home prices as the primary reason for it being a good time to sell a home, suggesting that expectations of slowing or declining home prices have begun to negatively affect selling sentiment. Conversely, lower home prices would obviously be welcome news for potential first-time homebuyers, who are likely feeling the combined affordability constraints of the high home price and high mortgage rate environment. In fact, the survey’s ‘ease of getting a mortgage’ component dropped to an all-time low among this typically younger demographic (i.e., 18- to 34-year-olds).”

Duncan said with home prices expected to moderate over the forecast horizon and economic uncertainty heightened, both homebuyers and home-sellers might be incentivized to remain on the sidelines – homebuyers anticipating home price declines and potential home-sellers not keen to give up their lower, fixed mortgage rate – contributing to a further cooling in home sales through the end of the year.