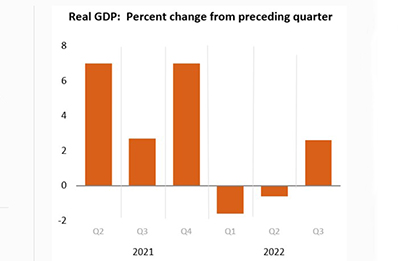 After two quarters in negative territory, real U.S. gross domestic product swung positive in the third quarter, according to the first (advance) estimate released by the Bureau of Economic Analysis last Thursday.

BEA reported real gross domestic product increased at an annual rate of 2.6 percent in the third quarter. In the second quarter, real GDP fell by 0.6 percent.

“The 2.6 percent increase in real GDP in the third quarter was broadly driven by consumer spending, business fixed investment and government spending,” said Joel Kan, Vice President and Deputy Chief Economist with the Mortgage Bankers Association. “Consumer spending continued to skew towards services, which saw its ninth consecutive quarterly growth dating back to the pandemic-induced contraction in 2020. This robust spending on services contributed to almost half of the 2.6 percent overall growth rate. However, spending on goods declined for the third straight quarter, as households continued to pull back on some aspects of their spending.”

Kan noted residential investment declined for the sixth straight quarter, and by the most since the second quarter of 2020, and was attributed to residential construction and broker commissions. “This is consistent with other housing market data on home purchase applications, home sales, and housing starts, which showed significant weakening last quarter as mortgage rates reached multi-decade highs and as economic uncertainty grew,” he said. “Residential investment subtracted 1.37 percentage points from GDP growth, the largest drag since 2007.”

“The headline growth rate was flattered by the 2.8 percentage point boost from real net exports,” said Jay Bryson, Chief Economist with Wells Fargo Economics, Charlotte, N.C. “However, imports likely will rebound and exports look set to weaken given clear signs of economic deceleration abroad and the strength of the dollar.”

“Despite a strong third quarter result, our forecast is for a slowdown in economic growth in the coming quarters and for the economy to enter a recession in 2023,” Kan said. “Sharp slowdowns in global growth and tighter financial conditions have started to exert pressure on parts of the economy, in particular housing. There are also early signs of weakening in the job market, such as slower monthly payroll growth and declining job openings.”