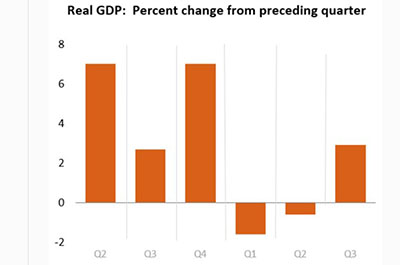 If the U.S. is in a recession, traditional data aren’t yet showing it.

Real gross domestic product increased at an annual rate of 2.9 percent in the third quarter, according to the “second” (revised) estimate released Wednesday by the Bureau of Economic Analysis.

In the second quarter, real GDP decreased 0.6 percent. In the advance estimate last month, the increase in real GDP was 2.6 percent.

The second estimate primarily reflected upward revisions to consumer spending and nonresidential fixed investment, partly offset by a downward revision to private inventory investment. Imports, which are a subtraction in the calculation of GDP, decreased more than previously estimated.

“Still modest growth in the core areas of the economy and weakness in real gross domestic income more clearly demonstrates the slowdown in Q3 economic growth,” said Tim Quinlan, Economist with Wells Fargo Economics, Charlotte, N.C. “There was evidence of margin compression, which we expect to continue ahead as businesses find it increasingly difficult to pass costs onto consumers. Slowing demand and higher borrowing costs will make it more difficult to retain workers and invest in capital expenditures while maintaining the bottom line. Something’s got to give.”