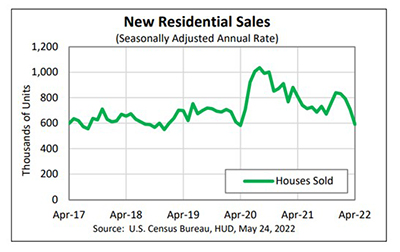 In a separate report, RE/MAX, Denver, said April home sales rose by less than 1 percent but inventories—which had been at record-low levels for a sustained period—showed signs of recovery.

“New-home sales in April come in well below consensus expectations,” said Odeta Kushi, Deputy Chief Economist with First American Financial Corp., Santa Ana, Calif. “Affordability is a growing challenge as higher new-home prices & rising mortgage rates are pricing out some buyers. One year ago, 25% of new-home sales were priced below $300,000. In April of this year, only 10% of new home sales were priced below $300,000.”

Kushi noted the new-home market is sensitive to rising rates. “While builders are facing some relief with material costs, buyers are faced with much higher borrowing costs. This is pricing out many new-home buyers, which will continue to have a slowing effect on the new-home market,” she said.

“April’s fall is the sharpest monthly contraction since July 2013, which coincided with a spike in mortgage rates following the Fed’s comments on forthcoming monetary policy tightening and resulting ‘taper tantrum,’” Vitner said. “The 591,000-unit annual pace of home sales was the slowest pace since April 2020, when sales came to a grinding halt at the onset of the pandemic.”

Additionally, Vitner said, borrowing costs only appear to be rising further, which should continue to weigh on housing activity over the next few months. “Rising financing costs and rapid price appreciation have caused many traditional buyers to take a step back from the housing market,” he said. In addition, some previously qualified buyers may no longer qualify under current interest rates. Home builders continue to contend with supply constraints which make completing new homes challenging.”

“The new home sales report released today by the Census Bureau clearly points to a housing market that has turned,” said Doug Duncan, Chief Economist with Fannie Mae, Washington, D.C. “Following an increase of over 200 basis points in mortgage rates since the end of last year, signs of slowing housing activity have been building, as previous reports on existing home sales, mortgage applications, and homebuilder confidence have all turned lower. However, today’s new home sales report is the sharpest indicator yet, with sales coming in well below both our own and consensus expectations.”

The report said the median sales price of new houses sold in April rose to $450,600; the The average sales price rose to $570,300. A bright spot in the report: the seasonally adjusted estimate of new houses for sale at the end of April rose 444,000, representing a supply of 9.0 months at the current sales rate, the highest level since the start of the pandemic.

Nick Bailey, President and CEO of RE/MAX LLC, said after a frenzied two-year run, the market appears to be shifting slowly toward more balance. He said he anticipates a strong second half to 2022, albeit at a bit of a slower place.

“In the big picture, it’s still a strong housing market, with sales happening quickly and demand easily outpacing supply,” Bailey said. “We’re starting to see a cooling in sales, which isn’t surprising given the record results of 2021 and the recent rise in interest rates. That should create more balance over time, countering the frenzied seller’s market we’ve had for so long. Driven by generational demand, rising rental costs and still relatively low interest rates, 2022 could still rank as one of the best years in the past decade.”

The report said of the 53 metro areas surveyed in April, the overall average number of home sales rose by 0.5% from March and fell by 12.8% compared from a year ago. Markets with the biggest decrease in year-over-year sales percentage were Miami at -24.9%, Bozeman, Mont., at -22.5%, and Coeur d’Alene, Idaho, at -21.1%. Only one metro area had a year-over-year sales percentage increase, Honolulu at +0.2%.

Inventories were another story. Though up 24.0% month over month, active inventory was down 10.4% from a year ago, driven in part by a 7.4% decline in new listings year over year. Inventories increased from 0.7 in March to 0.8 in April.