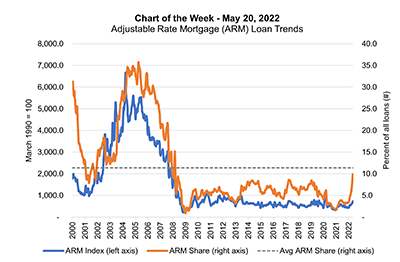 The recent increase in the adjustable-rate mortgage share of applications has caught the attention of market participants and the media. The ARM share has increased from 3.1 percent in the first week of January to 10.3 percent as of the week ending May 13, peaking at 10.8 percent the week prior.

The rising demand for ARMs has been driven by a spike in the 30-year fixed mortgage rate, which has risen thus far this year from 3.5 percent to 5.5 percent. The ARM share is moving in that direction as borrowers – especially homebuyers – scramble to find ways to reduce their monthly payments and view ARMs as more attractive given the widening spread between rates for ARM and fixed-rate loans. Additionally, as we moved into a predominantly purchase market, that adds upward pressure to the ARM share as purchase borrowers typically utilize ARM loans more than refinance borrowers. ARM loans typically have lower rates than fixed-rate loans and their average loan sizes have historically been larger.

This week’s MBA Chart of the Week utilizes data from our Weekly Applications Survey and provides a snapshot of the ARM share going back to 2000, along with the ARM index, which captures the volume of ARM applications in a given week. Both series are on a weekly frequency and presented as 4-week moving averages to smooth the volatility inherent in weekly data. The most recent week’s ARM share, at around 10 percent, is the highest since 2008, but still below the historical average of 11.3 percent (dotted line in the chart). The current ARM share is also well shy of the heights seen in the early to mid-2000s when it was as high as 36 percent of applications.

The ARM index shows that the number of ARM applications per week has grown over 70 percent since January 2022, but the current pace is less than half of its long-term average and more than 80 percent below the peaks observed from 2003-2006. Volume is down sharply for fixed-rate loans, and this small increase in ARMs is not enough to offset that, even if the ARM share has roughly tripled.

This is a very different environment than the products prevalent prior to the Great Financial Crisis. Underwriting is significantly more stringent now than it was prior to the implementation of the ATM/QR and other Dodd-Frank regulations. The credit quality of borrowers is stronger, and the types of ARMs that are available now are of much lower risk, without the same potential for near-term payment shock. Over two-thirds of ARM loans applied for in recent months have 5, 7, or 10 year fixed periods, allowing borrowers more time to benefit from a fixed, lower rate and providing more time to build equity in their homes.