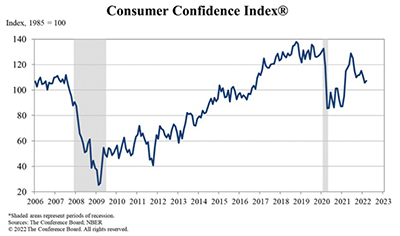 The Conference Board, New York, reported its Consumer Confidence Index increased for the first time this year, albeit just slightly.

The Index rose to 107.2 in March, up from 105.7 in February. The Present Situation Index—based on consumers’ assessment of current business and labor market conditions—improved to 153.0 from 143.0 last month. However, the Expectations Index—based on consumers’ short-term outlook for income, business, and labor market conditions—declined to 76.6 from 80.8.

“Consumer confidence was up slightly in March after declines in February and January,” said Lynn Franco, Senior Director of Economic Indicators with The Conference Board. “Expectations, on the other hand, weakened further with consumers citing rising prices, especially at the gas pump, and the war in Ukraine as factors. Meanwhile, purchasing intentions for big-ticket items like automobiles have softened somewhat over the past few months as expectations for interest rates have risen.”

Nevertheless, Franco said, “consumer confidence continues to be supported by strong employment growth and thus has been holding up remarkably well despite geopolitical uncertainties and expectations for inflation over the next 12 months reaching 7.9 percent—an all-time high. However, these headwinds are expected to persist in the short term and may potentially dampen confidence as well as cool spending further in the months ahead.”

“A strong job market is helping households shoulder the worsening burden of rising prices,” said Tim Quinlan, Senior Economist with Wells Fargo Economics, Charlotte, N.C. “While the COVID era has made empty shelves and missing products de rigueur, there are no shortages when it comes to factors weighing on consumer confidence. High inflation was already a top-of-mind concern before Russia’s invasion of Ukraine and the associated surge in gas prices. Surging prices continues to weigh on the expectations component which fell to 76.6 in March from 80.8 previously. The accompanying note from the Conference Board said consumers cited rising prices, especially at the gas pump, and the war in Ukraine as factors.”

Quinlan said a key question going forward will be whether the labor market is strong enough for wage growth to keep up with inflation. “Even though gas prices have a tendency to get into consumers’ heads, the share of household spending on gas and other energy goods is less than 3% at present and has never exceeded 5% over the past 20 years,” he said. “Still, gas prices eventually seep into food costs and other essentials and could eventually force hard choices, but for now we expect consumer spending will merely slow rather than slip into outright decline.”

However, for homeowners—and would-be homeowners—Quinlan said things could be different. “With consumers having to pay almost a fifth more for homes this year than last year and having their incomes stifled by the aforementioned inflation, it is not surprising many would-be homeowners may be second-guessing whether now is the right time to purchase,” he said. “Despite this apprehension, home purchases have remained strong up to this point, and there remains scope for a good year ahead for home buying, particularly as a break in supply chain issues allows builders to put more inventory up for sale.”

–18.7% of consumers expect business conditions will improve, down from 21.3%.

Consumers were mixed about the short-term labor market outlook:

Consumers were also mixed about their short-term financial prospects: