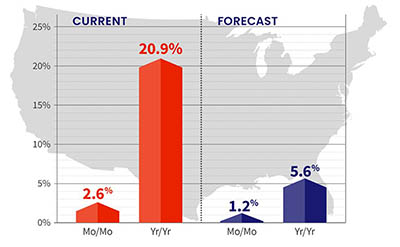 CoreLogic, Irvine, Calif., said home prices nationwide, including distressed sales, increased year over year by 20.9% in April from a year ago.

On a month-over-month basis, the company’s monthly Home Price Index reported home prices increased by 2.6% in April from March.

“The record growth in home prices is a result of a scarcity of for-sale inventory coupled with eager buyers who want to purchase before mortgage rates go higher,” said CoreLogic President & CEO Patrick Dodd. “Buyers who closed on their home in April had locked in their mortgage rate in February or March, when rates were lower than today. With 30-year fixed mortgage rates much higher now, we expect to see waning buyer activity because of eroding affordability. As a consequence, our forecast projects slowing price growth over the coming year.”

No states posted an annual decline in home prices. States with the highest increases year over year were Florida (32.4%), Arizona (28.1%) and Tennessee (27.2%). Large cities continued to experience price increases in March, with Phoenix leading the way at 29.7% year over year.