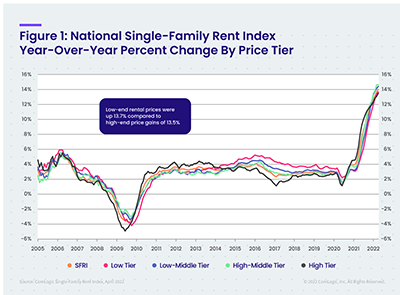 Just as in in past months, a shortage of rental properties on the market is putting pressure on prices, as is a thriving job market, CoreLogic said. The nation’s economy added nearly 430,000 new positions in April and there was a 5.5 percent annual wage increase.

The year-over-year U.S. rent price growth once again was more than double the April 2021 increase and more than six times higher than the April 2020 growth, CoreLogic said in its monthly Single-Family Rent Index report. Rental cost gains slowed in early 2020 due to the uncertainty surrounding the coronavirus pandemic but rebounded by autumn of that year to surpass the pre-pandemic rate.

Boesel noted she expects single-family rent growth to continue to increase “at a rapid pace” throughout 2022.

Lower-priced (75 percent or less than the regional median): 13.7 percent, up from 4 percent in April.