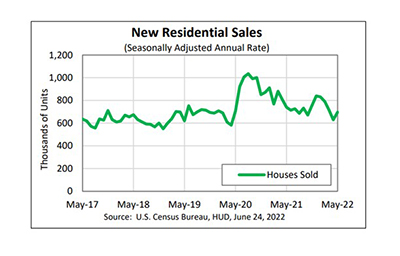 May new home sales proved to be a solitary bright spot in a month of otherwise disappointing housing reports, rising by nearly 11 percent from April, HUD and the Census Bureau reported Friday.

The report said sales of new single‐family houses in May rose to a seasonally adjusted annual rate of 696,000, 10.7 percent higher than the revised April rate of 629,000, but fell by 5.9 percent from a year ago.

“Sales of new single‐family homes in May came in above consensus expectations,” said Odeta Kushi, Deputy Chief Economist with First American Financial Corp., Santa Ana, Calif.  “[But] affordability is a growing challenge as higher new-home prices and rising mortgage rates are pricing out some buyers. One year ago, 23% of new-home sales were priced below $300,000. In May of this year, only 9% of new home sales were priced below $300,000. While the nation continues to face a housing shortage, new-home sales may slow as worsening affordability and higher construction costs take a toll on the new-home market.”

“There was a surge in completions of single-family homes in May reported in the housing starts data earlier this month, which we believe was driven by buyers racing in to lock in mortgage rates before rates rose even higher,” said Mark Vitner, Senior Economist with Wells Fargo Economics, Charlotte, N.C. “Sales of new homes under construction accounted for the largest share of May’s increase, although sales of homes where construction has not yet started and sales of completed homes also rose last month.”

Vitner noted while the positive May report was not surprising, “we believe the May data will likely prove to be the last hurrah for new home sales. The surge in sales to lock in mortgage rates appears to have pulled sales forward. Home builders report sales have slowed substantially during the past few weeks. Buyer traffic dipped below the 50 breakeven level in the June NAHB/Wells Fargo Home Builders Survey for the first time since June 2020, indicating that more builders saw a decline in buyer traffic than those who saw an increase in June. That survey, however, covered early June and traffic slowed significantly more later in the month….we expect prices to decline over the next year to 18 months and look for the median price to fall back to around $400,000 by the end of this year.”

Doug Duncan, Chief Economist with Fannie Mae, Washington, D.C., agreed. “Going forward, we expect homebuilders to be willing to offer more incentives and discounts to support sales in a rising mortgage rate environment,” he said. “We also expect the near-term sales pace to remain at a solid level but, nonetheless, to trend downward in coming quarters as higher mortgage rates weigh on affordability.”

The report said the median sales price of new houses sold in May fell to $449,000.  The average sales price fell to $511,400. The seasonally adjusted estimate of new houses for sale at the end of May rose slightly to 444,000, representing a supply of 7.7 months at the current sales rate.