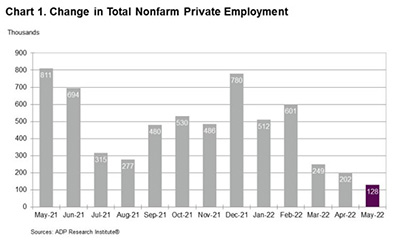 “Under a backdrop of a tight labor market and elevated inflation, monthly job gains are closer to pre-pandemic levels,” said Nela Richardson, chief economist with ADP. “The job growth rate of hiring has tempered across all industries, while small businesses remain a source of concern as they struggle to keep up with larger firms that have been booming as of late.”

The advance unadjusted insured unemployment rate was unchanged at 0.9 percent during the week ending May 21. The advance unadjusted level of insured unemployment in state programs totaled 1,259,162, a decrease of 31,222 (2.4 percent) from the preceding week. The seasonal factors had expected an increase of 1,343 (0.1 percent) from the previous week. A year earlier the rate was 2.5 percent; volume was 3,499,487.

This morning, the Bureau of Labor Statistics releases its Employment Report (8:30 a.m. ET). MBA Chief Economist Mike Fratantoni will provide commentary and analysis on the Employment report in the Monday, June 6 edition of MBA NewsLink.