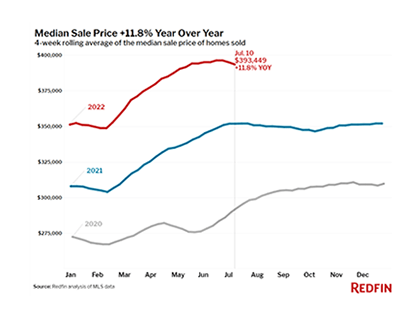 Redfin, Seattle, said the median sale price for U.S. homes came down 0.7% from its record-breaking June peak during the four weeks ending July 10.

Sellers’ asking prices also came down 3% from their May peak as the share of homes with price drops hit another new high, Redfin reported. Home supply posted its first year-over-year increase since August 2019 as pending sales continued to slide. These changes in the housing market can be attributed to buyers reaching their limit on costs—not just of homes and mortgages, but also food, transportation and energy.

“Inflation and high mortgage rates are taking a bite out of homebuyer budgets,” said Redfin Chief Economist Daryl Fairweather. “Few people are able to afford homes costing 50% more than just two years ago in some areas, so homes are beginning to pile up on the market. As a result, prices are starting to come down from their all-time highs.”

Fairweather noted she expects this environment of reduced competition and declining home prices to continue for at least the next several months.

The seasonally adjusted Redfin Homebuyer Demand Index–a measure of requests for home tours and other home-buying services–was down 18% year-over-year during the week ending July 10.

Home touring activity as of July 10 was up 1% from the start of the year, compared to a 23% increase at the same time last year, home tour technology company ShowingTime said.

Mortgage purchase applications were down 18% from a year earlier during the week ending July 8, while the seasonally adjusted index was down 4% week over week, the Mortgage Bankers Association said.