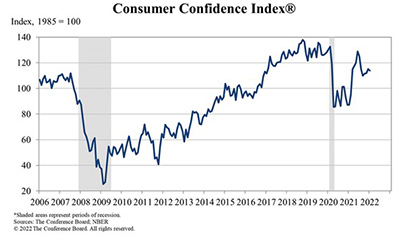 The monthly Board Consumer Confidence Index fell in January to 113.8 from 115.2 in December. The Present Situation Index—based on consumers’ assessment of current business and labor market conditions—improved to 148.2 from 144.8 last month. The Expectations Index—based on consumers’ short-term outlook for income, business, and labor market conditions—declined to 90.8 from 95.4.

“Consumer confidence moderated in January, following gains in the final three months of 2021,” said Lynn Franco, Senior Director of Economic Indicators with The Conference Board. “The Present Situation Index improved, suggesting the economy entered the new year on solid footing. However, expectations about short-term growth prospects weakened, pointing to a likely moderation in growth during the first quarter.”

Franco noted nevertheless, the proportion of consumers planning to purchase homes, automobiles and major appliances over the next six months all increased. “Concerns about inflation declined for the second straight month, but remain elevated after hitting a 13-year high in November,” she said. “Concerns about the pandemic increased slightly, amid the ongoing Omicron surge. Looking ahead, both confidence and consumer spending may continue to be challenged by rising prices and the ongoing pandemic.”

“Consumers are souring on their outlook for the economy and their own paychecks even as they admit that business conditions have improved,” said Tim Quinlan, Senior Economist with Wells Fargo Economics, Charlotte, N.C. “When asked about the present situation, however, consumers are as upbeat as they have been since August.”

Still, Quinlan noted the decline was smaller than the consensus had expected. “And even more surprisingly, consumers’ take on the present situation actually rose to its highest level since August,” he said. “Since the Omicron variant first emerged on the scene in late November, financial markets have been trying to determine the extent to which the variant might stymie economic growth as the Delta variant did in 2021. The ‘not a huge deal’ camp can point to today’s report as evidence that consumers have not completely lost their confidence. Our take is that hospitalizations have become a bigger factor than case counts, and the recent increase in people having to go to the hospital may yet take a bigger toll on confidence.”

Consumers were also less optimistic about the short-term labor market outlook: 22.7% of consumers expect more jobs to be available in the months ahead, down from 24.2%; 15.7% anticipate fewer jobs, up from 14.7%.