September Builder Apps Down 13% from Year Ago 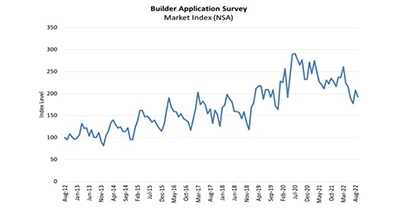 Mortgage applications for new home purchases in September fell by 7 percent from August and by 13.2 percent a year ago, the Mortgage Bankers Association reported Tuesday.

MBA estimates new single-family home sales, which has consistently been a leading indicator of the U.S. Census Bureau’s New Residential Sales report, at a seasonally adjusted annual rate of 637,000 units in September, based on data from the BAS, a decrease of 8.9 percent from the August pace of 699,000 units. On an unadjusted basis, MBA estimates 52,000 new home sales in September, a decrease of 10.3 percent from 58,000 new home sales in August.

MBA said the average loan size measured in the survey fell for the fifth consecutive month – after reaching a survey high in April– to $406,767.”