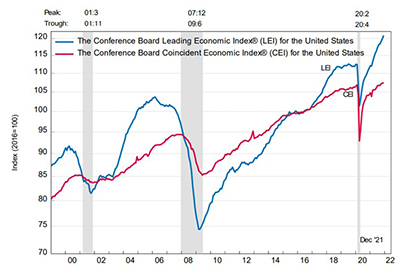 The Conference Board, New York, said its Leading Economic Index rose by 0.8 percent in December, the 10th straight monthly gain.

“The U.S. LEI ended 2021 on a rising trajectory, suggesting the economy will continue to expand well into the spring,” said Ataman Ozyildirim, Senior Director of Economic Research with The Conference Board. “For the first quarter, headwinds from the Omicron variant, labor shortages and inflationary pressures—as well as the Federal Reserve’s expected interest rate hikes—may moderate economic growth.”

“The environment heading into 2022 has led to volatility in the market-related contributions, which adds a layer of uncertainty to the next few months,” said Tim Quinlan, Senior Economist with Wells Fargo Economics, Charlotte, N.C.

Quinlan noted first-time claims for unemployment insurance have been the main contributor to the leading index in two of the past three months. December was a perfect wrap to 2021—jobless claims fell to their lowest monthly average since 1969 and contributed 0.23pp,” he said. “Despite weaker-than-expected payroll numbers and a disconnect between the stories of the household and establishment survey, jobless claims offer a clear sign of tightness in the labor market.”