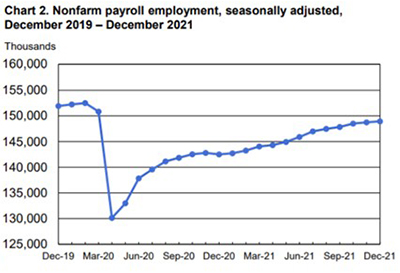 The unemployment rate fell by 0.3 percentage points to 3.9 percent in December, its lowest rate in nearly two years. The report said employment continued to trend up in leisure and hospitality, in professional and business services, in manufacturing, in construction and in transportation and warehousing.

“Although waxing and waning of the pandemic and unusual seasonal patterns led to some month-to-month volatility in job growth, the pace of recovery overall in the job market has been remarkable,” said Mike Fratantoni, Chief Economist with the Mortgage Bankers Association. “The unemployment rate is now at 3.9%; the economy is at full employment. Although the labor force participation rate is lower than it was pre-pandemic, it is not moving much right now, suggesting that the unemployment rate will continue to drop in 2022, even if the faster wage growth eventually does bring more workers into the labor force.”

Fratantoni noted as was the case in November, employment growth of 651,000 in the household survey was much stronger than the 199,000 in the establishment survey, perhaps indicating there are more self-employed and gig economy workers at this stage of the cycle. In terms of the housing sector, there was little change in construction employment in December, with most of the gains in non-residential construction.

“The job market is tight, and businesses are having increased difficulty filling the almost 11 million job openings in the economy, even after raising wages,” Fratantoni said. “MBA forecasts that the unemployment rate will decrease to 3.5% by the end of 2022, which is in line with recent Federal Reserve projections and would support a more rapid normalization of interest rates this year.”

“Approximately 16% of the jobs lost in the pandemic have not been regained,” said Odeta Kushi, Deputy Chief Economist with First American Financial Corp., Santa Ana, Calif. “While the unemployment rate declined, the labor force participation rate remained flat in December’s report. There are nearly 2.3 million workers still missing from the labor force compared with pre-pandemic levels.”

Sarah House, Senior Economist with Wells Fargo Economics, Charlotte, N.C., said although the employment report once again fell short of the mark on payrolls, “the headline miss detracts from details that show the labor market is unequivocally tight. The unemployment rate tumbled to 3.9% while average hourly earnings surprised to the upside with a 0.6% gain. This keeps the March FOMC meeting very much alive for a potential increase in the fed funds rate, even as the labor market’s momentum is likely to get briefly tripped up by the recent surge in COVID cases.”

House said the near-term path of employment growth “depends firmly on the availability of labor, as job openings and hiring plans indicate demand for workers remains robust. December’s report underscored that workers are only likely to trickle back into the jobs market as reasons for sitting out, like financial cushions, health concerns and childcare issues do not unwind all at once.”