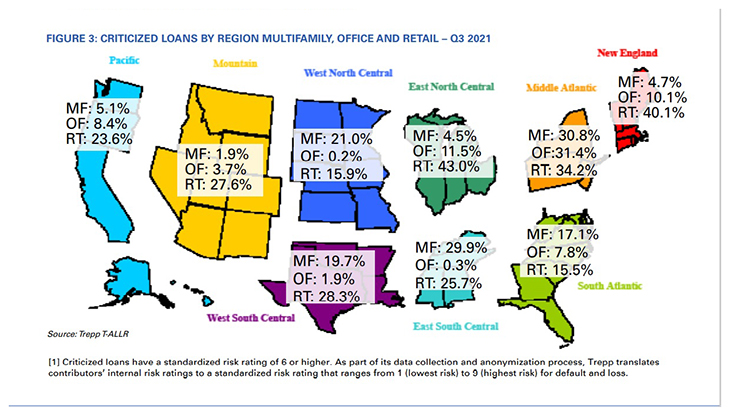 “At a high level, conditions seem good in commercial real estate lending, however, COVID’s impacts can still be seen,” said Matt Anderson, Trepp Managing Director of Applied Data and Research. “Delinquency rates are still elevated for lodging and retail, the property-type mix within originations has clearly shifted to the pandemic favorites (industrial and multifamily) and lenders are still casting a wary eye on urban office markets.”

Trepp’s Anonymized Loan-Level Repository of bank balance sheet loan data found commercial real estate mortgage delinquencies hit a recent peak of 1.3 percent in late 2020 as the pandemic disrupted economic activity. “Since year-end 2020, the economic recovery has helped bring mortgage delinquency rates down, with modest improvements in the first three quarters of 2021,” the report said. The overall delinquency rate as of the third quarter for bank loans was just under 1 percent, while the more serious delinquency rate stood at 0.8 percent, both above their pre-pandemic levels.

Last week the Mortgage Bankers Association released its CREF Loan Performance Survey for the final three months of 2021. “The fourth quarter saw continued improvement in the performance of commercial and multifamily mortgages, particularly among property types that were the most impacted by the downturn,” said Jamie Woodwell, MBA Vice President of Commercial Real Estate Research. He noted the share of outstanding balances that are delinquent fell for both lodging and retail properties as property owners and lenders and servicers work through troubled deals. “The share of loan balances becoming newly delinquent was the lowest since the onset of the pandemic,” Woodwell said.

“Risk ratings for office loans have increased, especially in the largest markets, as the long-term prospects for the sector have become less certain,” Trepp said. “The large and commuter-dependent New York office market is the source of the Mid-Atlantic’s high 31 percent proportion of criticized loans. The other large metro areas with large CBD office markets, such as Boston and Chicago, are also driving double-digit proportions of criticized loans in the New England and East North Central areas.”

Multifamily generally has a lower proportion of criticized loans, but lenders in several areas said they were keeping a closer eye on multifamily as income and renter protections put in place in response to the pandemic expired last year, the report said. “Retail loans are widely perceived to be at higher risk, with double-digit proportions of loans in the ‘criticized’ category,” Trepp said. “The areas with the highest proportions of criticized loans were East North Central, Mid-Atlantic and New England.”