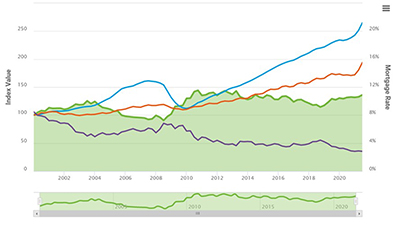 Overall, the index rose by 2.6% quarterly and 3.5% annually, with every market examined posting a positive number in the third quarter for the first time since 2019. Mortgage rates, a component of the index, decreased over the quarter by 5 basis points, offsetting the 5-bps increase last quarter, but remain down 37 bps year over year.

“Markets across the country are rebounding strongly from the impact of COVID-19, including those that were hit hardest by the pandemic,” said Steve Guggenmos, Freddie Mac vice president of Multifamily Research & Modeling.

Over the quarter, AIMI increased in the nation and all 25 markets. Other key findings:

•           NOI growth was universally positive for markets and the nation. NOI grew the fastest in New York and Tampa at 13.2% and 11.5%, respectively. Even the slowest growing metro, Minneapolis, posted a strong growth of 3.8%.

•           Over the year, AIMI increased in the nation and in 23 markets, while the Jacksonville, Florida and Minneapolis markets experienced a modest AIMI drop.