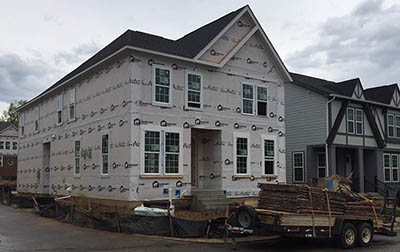 In a separate report, NAHB said seven out of every 10 American home buyers cannot afford the median-priced new home.

The NAHB/Wells Fargo Housing Market Index fell by one point in February to 18, as the industry grapples with ongoing building material production bottlenecks that are raising construction costs and delaying projects. It marked the second consecutive one-point drop.

The HMI index gauging current sales conditions increased one point to 90; the gauge measuring sales expectations in the next six months fell two points to 80; and the component charting traffic of prospective buyers posted a four-point decline to 65.

Regionally, three-month moving averages saw the Northeast increase by three points to 76; the West rose by one point to 89; the Midwest fell by one point to 73; and the South edged one point lower to 86.

“Production disruptions are so severe that many builders are waiting months to receive cabinets, garage doors, countertops and appliances,” said NAHB Chairman Jerry Konter. “These delivery delays are raising construction costs and pricing prospective buyers out of the market. Policymakers must make it a priority to address supply chain issues that are harming housing affordability.”

“Residential construction costs are up 21% on a year over year basis, and these higher development costs have hit first-time buyers particularly hard,” said NAHB Chief Economist Robert Dietz. “Higher interest rates in 2022 will further reduce housing affordability even as demand remains solid due to a lack of resale inventory.”

In a separate report, NAHB said rising home prices and interest rates are taking a toll on housing affordability, with 87.5 million households — or 69% of all U.S. households — unable to afford a new median priced home.

NAHB calculated the underwriting criteria used to determine affordability as the sum of mortgage payments, property taxes, home owners and private mortgage insurance premiums during the first year as no more than 28% of the household’s income. Key assumptions include a 10% down payment, a 30-year fixed rate mortgage at an interest rate of 3.5%, and an annual premium starting at 73 basis points for private mortgage insurance.

The metropolitan area with the largest priced out effect, in terms of absolute numbers, is New York-Newark-Jersey City, N.Y.-N.J.-Pa., where 4,734 households would be squeezed out of the market for a new media-priced if the price increases by $1,000.