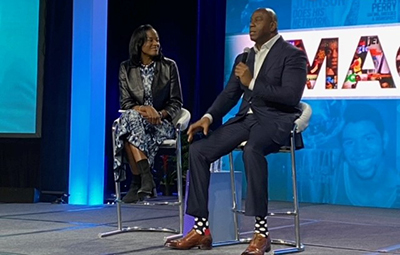 The NBA Hall of Famer spoke here Tuesday at the 2022 MBA Commercial/Multifamily Finance Convention and Expo. Many consider Johnson one of the best point guards ever to play basketball. But even during his 13 seasons with the Los Angeles Lakers, he was talking to his mentors about what his next step should be.

After Johnson retired from playing, he became part-owner of the team for several years. He is also part owner of the Los Angeles Dodgers baseball team and the Los Angeles Sparks WNBA franchise and has considerable investments in commercial real estate.

“The fourth year I went back, the committee said, ‘Magic, your business plan is strong, but why should we invest in inner cities?’ I replied, ‘look at it this way, we are short of both housing and retail in the inner cities. So the demand is there, and if I meet that demand, we are going to hit a home run.’ They allocated $50 million and said if the fund overshoots, they said they could allocate $100 million more.”

Institutional capital changed everything, Johnson said. “There is money to be made in urban America. So I partnered with Canyon Partners LLC and I ran a real estate fund for 11 years. We made a lot of money and we brought housing to inner cities when nobody else was doing that. Today, big companies are going into the cities, but back then that was not happening.”

One key to success is education, Johnson noted. “We had to go out and educate the community first. That has to be a part of your offering, to educate minorities on the housing market. If you do that, you will hit a home run; that is the most important part of it. That’s why our real estate fund took off. We raised over a billion dollars for our last fund. We had $2 billion committed, but we only took $1 billion. When you think about the combined $3 trillion spending power of Latinos and Blacks combined, that’s a lot of money.”

Johnson said another secret of his success has been to partner with experts before committing funding to his retail, movie theater and Starbucks store investments.

“When I look at what we’ve been able to do, I see that our community now has quality retail and housing options,” Johnson said. “Now we need to make sure that we can get the loans.”