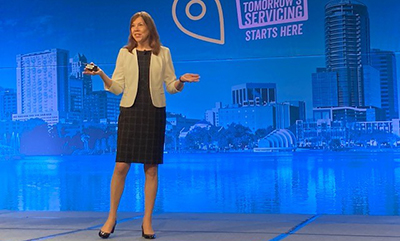 “We are expecting the U.S. economy to move along at a good pace for the next several years,” said MBA Associate Vice President of Economic and Industry Forecasting Joel Kan here Thursday at the MBA Servicing Solutions Conference & Expo.

Kan said the current economy is capable of weathering a number of challenges short of another pandemic. Compared to past recessions, he said, the current economic recovery has been very different. Whereas the Great Recession resulted in a slow, four-year recovery between 2011 and 2014, the current recession saw a relatively short bounce-back of just three quarters, driven by job growth. “We saw a tremendous pickup in growth after the initial impact of the coronavirus, which boosted the recovery,” he said.

“There’s lots of churn in the economy right now” on jobs, Kan noted. “We currently have two jobs opening per worker; in 2020, it was .5 jobs per worker.”

The inability for businesses to find and retain workers has resulted in strong wage growth, giving workers an advantage. “Wage growth is helping U.S. households, but it has become much more challenging to run a business,” he said. “There are strong financial incentives for people to jump to another job, and it’s difficult for employers to replace them.”

But Americans, spooked by 2020, have been rapidly increasing their savings. “When the economy slowed in 2020, people found different ways to use their disposable income, and many people saved that money,” Kan said. “Now that the economy is opening up again, those savings will likely support further spending growth.”

With the strong economy, Kan said inflation has picked up the pace as well, presenting a challenge for the Federal Reserve. “Oil prices were already inflated before the Russian invasion, and we expected oil to remain elevated for some time,” Kan said. “We’re seeing the impact of inflation on U.S. households in gas prices and consumer goods. This is going to start making people change the way they consumer in the economy…you might see someone putting off a purchase if they think prices will change; and for big durable goods purchases, that is going to matter. And that will have an impact for manufacturers.

Kan said MBA expects the Federal Open Market Committee to raise the federal funds rate at least four times in 2022. But the rapid rate of inflation, and this week’s invasion of Ukraine by Russia, could further shake things up.

“We expect the Fed to be aggressive in trying to meet its dual goals—maintaining a strong employment picture and keeping inflation in check,” Kan said.

For the housing market, Kan said MBA expects mortgage rates to push past 4 percent. Nonetheless, he said the housing outlook remains positive. MBA expects increases in housing starts and sales for the next several years.

“We know the demand is there, and new construction will alleviate some of the current inventory shortages,” Kan said. “As we get new inventory, home price increases will slow to more traditional patterns, to around 5 percent.”

As rates rise, Kan said, refinances will continue to fall off in 2022 and into 2023. MBA expects 2022 mortgage originations to reach $2.6 trillion, of which a record $1.773 trillion will consist of purchase mortgages, refinances will fall to $861 million.

And as rates increase, the number of borrowers with refi potential are dropping off quickly. “If they haven’t moved by now, there most be other reasons why they haven’t refinanced,” he said.

Another trend that COVID accelerated was migration patterns and housing choices. “We saw this net migration out of urban areas into more rural areas,” Kan said. “This caused an additional layer of demand and stream on inventory. But in recent months we have seen some catch-up.”

The inventory piece is “too big to ignore,” Kan added. “If we’re selling at the current annual pace and don’t add inventory, we’ll sell out in 1.6 months; the usual figure is six months.” And while building larger homes allows for some move-up inventories, “it’s not quite matching up yet,” he said. “Builders are not quite there, yet.”

“We’ve seen large independent mortgage banks take on a larger share of the servicing side, as well as the retention share,” Walsh said. “In 2020, a lot of independent mortgage bankers entered the servicing space. The mortgage-servicing rights environment was volatile; in 2021, it was still strong, even though it dropped off a bit. The question is, do they want to stay in this business? There has been a lot of movement of loans and a lot of discussions [as to their future strategies].”

Loan performance, Walsh said, continues to be positive; the MBA National Delinquency Survey show mortgage delinquency rates trending down after a sharp spike in the aftermath of the pandemic. “Before the pandemic, delinquency rates were at 40-year lows,” she said. “We are getting close to that again, and we are in a pretty good place.”