CREF22: View from the C-Suite 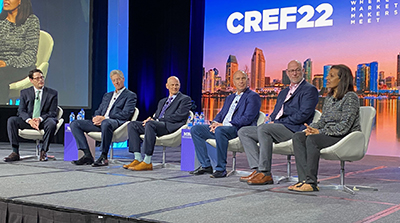 “Based on the energy I am seeing here at CREF, I think we’re going to have a good year as an industry,” said Jeffrey Weidell, CMB, Chief Executive Officer of Northmarq, Minneapolis. “That gives us the opportunity as a company to grow rather than responding to changes in the market; a chance to expand the business the way we want to.”

Smriti Popenoe, President and Co-Chief Investment Officer of Dynex Capital Inc., Glen Allen, Va., noted the Federal Reserve announced plans to reduce the size of its balance sheet this year. “For us, that’s an opportunity,” she said. “As investors, we all represent private capital and private capital needs to come in and take up the space the Fed has justifiably crowded us out of in recent years.”

Popenoe said the sector is seeing a “massive tailwind” from demographics. “It doesn’t seem like it’s going to slow down any time soon,” she said. “There is a dearth of supply and strong demand.”

Gary Otten, Senior Vice President, Managing Director & Head of Debt Strategies with MetLife Investment Management, New York, said he looks forward to traveling to see his teammates in 2022, “and meeting some people who have been with us for a while that I haven’t met in person yet. [2022 offers] the opportunity to energize those folks so we can do even better this year than last year,” he said.

But CEOs expressed some concerns as well. “There is an interesting dynamic regarding the return to work,” said Justin Wheeler, CEO of Berkadia, New York. “COVID definitely accelerated the trend, but the office won’t be the same. In our industry, people learn the business via an apprenticeship model, not through Zoom meetings. Maybe this will sound like ‘2010 called and asked for its business model back,’ but we have to keep talent growing in a changed business environment.”

Popenoe agreed it can be difficult to transition to an environment where some employees are in the office and others are teleworking. “It’s a strategic issue for us,” she said. “We are geographically distributed. An employer’s challenge is how to keep your company culture. Now we are transitioning into a new world where some people are remote and some are not, so we are learning as we go. We think it’s essential for some face-to-face communication to happen in the investment business; we don’t want to lose that.”

Weidell said Northmarq made a conscious decision to return to the office as early as possible. “We feel the collaboration is important,” he said. “There’s no better way to learn than to be able to just walk down the hall and talk to a colleague.” He said Northmarq “rethought” its approach to attending the CREF conference this year. Instead of simply sending senior executives, the firm sent new employees that have joined during the last two years so they can meet other people in person. “After all, CREF is all about establishing personal relationships,” he said.

Mark Fogel, Chief Executive Officer and President of ACRES Capital, New York, said his firm has always been entrepreneurial, “but that gets harder with more layers in the organization,” he said. “So we’re trying to maintain our space in the marketplace. At the same time, there is a dearth of talent out there now and people are moving around and I don’t want to lose good people. So, we want to keep the company nimble and flexible, because that helps you recruit and keep people.”

Otten said he worries about his team’s physical, financial and mental well-being in the current environment. “Not just people on my team, but also other people in the industry,” he said. “These days, it seems you have to ask people ‘how are you doing?’ three times before you get an answer that actually means something.”