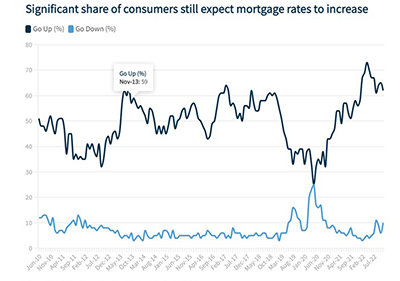 Fannie Mae, Washington, D.C., said its monthly Home Purchase Sentiment Index rose in November for the first time in nine months, although it remains just above the record low recorded in October.

The HPSI increased by 0.6 points in November to 57.3, still well below from a year ago. Four of the index’s six components increased modestly month over month, including those associated with homebuying and home-selling conditions; however, both remain well below year-ago levels, having declined on net 28 and 38 points, respectively.

Fannie Mae Chief Economist Doug Duncan said elevated mortgage rates continue to constrain affordability, with 62 percent of respondents expect mortgage rates to rise even further over the next year, compared to only 10 percent who expect rates to decline. Year over year, the full index is down 17.4 points.

“Both consumer homebuying and home-selling sentiment are significantly lower than they were last year, which, in our view, is unsurprising considering mortgage rates have more than doubled and home prices remain elevated,” Duncan said. “Consumers continue to expect mortgage rates to rise but home prices to decline, a situation that we believe will contribute to a further slowing of home sales in the coming months, as both homebuyers and home-sellers have reason for apprehension. We expect mortgage demand to continue to be curtailed by affordability constraints, while homeowners with significantly lower-than-current mortgage rates may be discouraged from listing their property and potentially taking on a new, much higher mortgage rate.”

Other key findings for November: