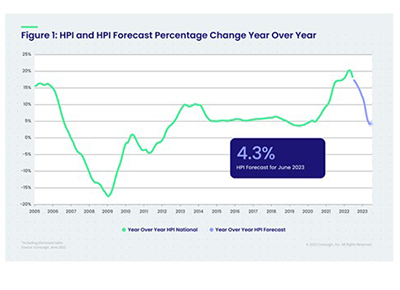 The CoreLogic Home Price Index and HPI Forecast for June showed nationwide, home prices grew by 18.3% from a year ago, marking the 125th consecutive month of year-over-year increases. However, though annual appreciation remained strong, it slowed for the second consecutive month, reflecting reduced buyer demand in part due to higher mortgage rates and worries about a slowing economy.

CoreLogic projects year-over-year appreciation will drop to 4.3% by June 2023, bringing home price growth close to the long run average from 2010 to 2020.

“Signs of a broader slowdown in the housing market are evident, as home price growth decelerated for the second consecutive month,” said Selma Hepp, interim lead of the Office of the Chief Economist with CoreLogic. “This is in line with our previous expectations and given the notable cooling of buyer demand due to higher mortgage rates and the resulting increased cost of homeownership. Nevertheless, buyers remain interested, which is keeping the market competitive — particularly for attractive homes that are properly priced.”

•       Once again, Tampa, Fla., logged the highest year-over-year home price increase of the country’s 20 largest metro areas in June, at 32.6%, while Phoenix retained the second slot at 26.1%. Following the nationwide trend, both metros saw annual home price gains slow from May.