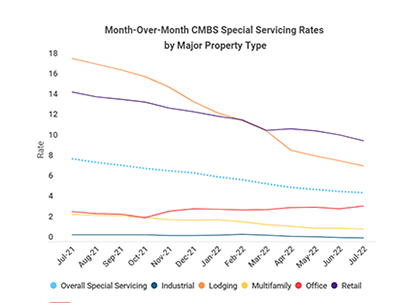 Commercial mortgage-backed securities special servicing and delinquency rates both dipped in July, according to Trepp LLC and Fitch Ratings.

“July CMBS data continued to promote the narrative that despite turmoil in the wider economic sectors, the commercial real estate market is isolated,” Nelson said. “Issuance has fallen off, specifically in what was a thriving CRE CLO market, but distress has continued to recede despite mounting economic concerns. When the pandemic first happened, it was easy to explain the low distress as a by-product of COVID loan extensions/ and forbearance, but the market’s continued ability to weather distress speaks to the safety of the market post-Great Financial Crisis regulations and changes to deal structures.”

Trepp reported just over $372.8 million in CMBS debt transferred to a special servicer in July. New retail transfers made up 40% of the newly transferred debt, followed closely by mixed-use transfers, which made up 23.71%.

Fitch Ratings, New York, said the CMBS delinquency rate fell one basis point in July to 2.05%. “Continued resolutions and steady new issuance was offset by an uptick in new delinquencies,” the report said, noting the pace of improvement has slowed compared to prior months as the overall rate inches closer to its pre-pandemic level.

“The month-over-month changes among the major property sectors’ delinquency rates were mixed,” Fitch said. “The hotel and industrial rates were unchanged, while office and multifamily declined, and retail increased.”