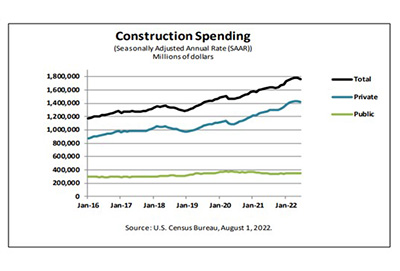 Construction spending in June fell by more than 1 percent from May, the Census Bureau reported Monday. In a separate report, Institute for Supply Management, Tempe, Ariz., said its Manufacturing Index fell by 0.2 percent to a nearly two-year low.

“The abrupt slowdown in buyer traffic appears to have led to an outsized drop in outlays for new single-family homes in June,” said Mark Vitner, Senior Economist with Wells Fargo Economics, Charlotte, N.C. “June’s 3.1% plunge in construction outlays for new single-family homes is the latest piece of data pointing to an abrupt slowdown in home building. Builders began to see a notable slowdown in buyer traffic in May, when mortgage rates spiked and many potential home buyers seemed to realize they could no longer afford to purchase a new home.”

Vitner said persistent labor shortages and supply chain bottlenecks have prompted builders to change their operating model. “With labor and certain essential supplies scarce, more builder inventory is now under construction and set to be quickly completed once a buyer signs a purchase contract,” he said. “Many builders are storing hard-to-source items and only using them once homes sell. This makes single-family residential construction spending much more coincident with new home sales, which coincidentally plunged 8.1% in June. That decline, however, does not include the climb in cancelations, which spiked along with mortgage rates in May and June.”

The weaker construction spending data slightly reduces the outlook for the third quarter, Vitner added. “The pullback in housing looks to be sharper and more immediate than previously thought,” he said. “Home builders’ new operating model means construction will ramp down with sales, but it will also bounce back if mortgage rates pull back and consumer confidence rebounds.”

Meanwhile, the Manufacturing ISM Report on Business said economic activity in the manufacturing sector grew in July, with the overall economy achieving a 26th consecutive month of growth, despite an 0.2 percentage point drop in the index to 52.8 percent, the lowest figure since June 2020.