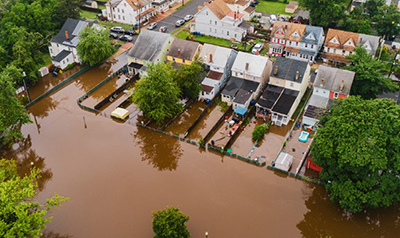 Wildfires? Floods? Other natural disasters? “Bring it on,” homeowners seem to be saying.

Redfin, Seattle, said homebuyers have paid a premium for high-fire-risk and high-flood-risk homes during the pandemic, as more people move into than out of climate-risky areas in recent years, in part because they can often get more bang for their buck and gain better access to nature.

Redfin reported the 50 counties with the largest percentage of homes facing high fire and flood risk saw their populations increase by an average of 3% and 1.9%, respectively, from 2016 through 2020, the result of positive net migration. In addition, purchases of second homes with high flood, storm and/or heat risk surged nearly 40% over the past two years.

Regardless of the increase in migration to climate risky areas, a recent Redfin survey found 63% of people who moved during the pandemic believe climate change is or will be an issue in the place they now live.

“From devastating floods in Kentucky and Missouri to deadly fires in California and brutal heat waves across the U.S., it’s clear that natural disasters are intensifying. Still, people are moving into risky areas,” said Redfin Chief Economist Daryl Fairweather. “When people decide where to live, they consider a whole host of things ahead of climate change, which has potential implications on their safety, home stability, and finances.”

Redfin said the median sale price of U.S. homes with high fire risk was $550,500 in April, nearly $120,000 (27.6%) more than $431,300 for homes with low fire risk, the largest premium in dollar terms since at least 2017. Places in fire-prone suburbia saw a surge in homebuyer demand over the last two years, causing prices to jump. That’s despite evidence that home prices have in the past recovered more slowly in fire-prone areas in the wake of disaster.