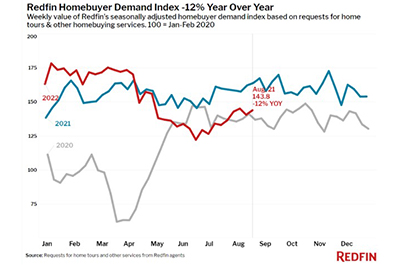 Redfin, Seattle, said would-be sellers are reluctant to list their homes as they have begun to see prices come down. With few new listings, buyers’ newfound bargaining power is reaching its limit, especially now that demand has stabilized.

But a separate analysis from First American Data & Analytics, Santa Ana, Calif., said investors appear to be increasing their purchases of homes, which could keep home prices higher in the short term.

Redfin reported listings of homes for sale fell 15% year over year in the four weeks ending August 21, the biggest annual decline since the start of the pandemic. As a result, the supply of for-sale homes fell 0.6% from the previous four-week period–a slight decline, but just the second such drop since February.

Redfin Economics Research Lead Chen Zhao said the dearth of homeowners putting their homes up for sale is partly a reaction to reduced demand and falling prices, as there are fewer buyers in the market due to rising mortgage rates and economic uncertainty.

“Sellers are coming to terms with the fact that volatile mortgage rates have dampened demand. Some sellers are pricing lower, and some homeowners are staying put because they’re nervous they won’t get a good offer or they’re hesitant to give up their low mortgage rate,” said Redfin Economics Research Lead Chen Zhao. “Because the number of homes for sale is no longer rising, buyers’ newfound bargaining power is reaching its limit. It’s worth noting that early demand indicators such as tours and requests for help from agents are elevated from their June lows and remain steady. So there is a pool of interested buyers out there, but sellers need to price fairly to attract them. If more sellers and buyers find that middle ground on price, we could see sales strengthen a bit.”

In a separate report, First American Senior Economist Xander Snyder said investor purchases of residential homes as rental properties as a share of all residential home sales have increased sharply in the last year, rising from 10.5 percent in May 2021 to nearly 18 percent this past May. He said increasing investor participation in the residential housing market has coincided with remarkable growth in house prices, leading some to attribute the worsening housing affordability crisis to the increase in investor participation.

But correlation is not causation, Snyder said. “Investor purchases could be driving price appreciation, or it could be the other way around, or both,” he said. “There could also be a third factor driving both the growing investor share of purchases and house price appreciation simultaneously – a pandemic-driven surge in housing demand against a limited supply of homes for sale. It’s difficult to know with a high degree of certainty.”