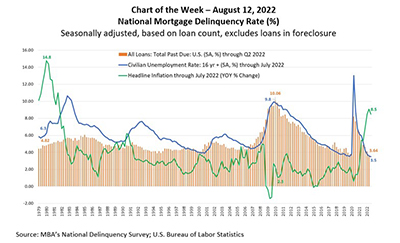 This week’s MBA Chart of the Week highlights the relationship between MBA’s mortgage delinquency rate and two economic indicators, the unemployment rate, and year-over-year changes in headline inflation – measuring the price of goods and services in the economy. Both of these indicators are supplied by the Bureau of Labor Statistics and could affect a borrower’s ability to make payments.

The relationship between the mortgage delinquency rate and year-over-year headline inflation is less apparent particularly in periods of high inflation. When inflation reached a high of 14.8 percent in first quarter 1980, the mortgage delinquency rate stood at 4.82 percent, well below the quarterly average of 5.30 percent across the period from first quarter 1979 to second quarter 2022. Today, we have the unusual situation of historically low delinquencies and unemployment, but high inflation not seen since the early 1980s – in addition to stock market volatility, increases in mortgage rates, and two quarters of economic contraction.

Yet, loan performance is as strong as ever. Of all the economic indicators that can lead to mortgage delinquencies, the U.S. unemployment rate seems to be the best gauge of loan performance.