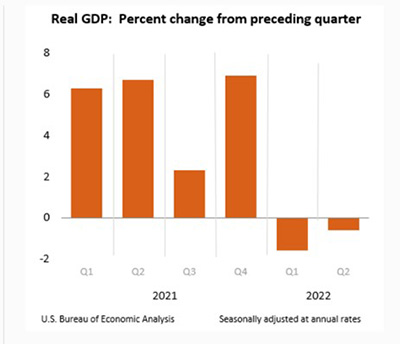 The U.S. economy continued to slow in the second quarter, the Bureau of Economic Analysis reported Thursday, although not at a pace as dramatically earlier this summer.

BEA reported real gross domestic product decreased at an annual rate of 0.6 percent in the second quarter, according to the “second” (revised) estimate. In the first quarter, real GDP decreased 1.6 percent. The GDP estimate released Thursday was based on more complete source data than were available for the “advance” estimate issued in July. I n the advance estimate, the decrease in real GDP was 0.9 percent.

“Second quarter weakness still reflects a genuine slowing in economic activity, and we forecast the economy will fall into a mild recession by the beginning of next year,” said Jay Bryson, Chief Economist with Wells Fargo Economics, Charlotte, N.C. “While Q2 still marks the second-consecutive decline in real GDP growth, the upward revisions weaken the current recession argument.”