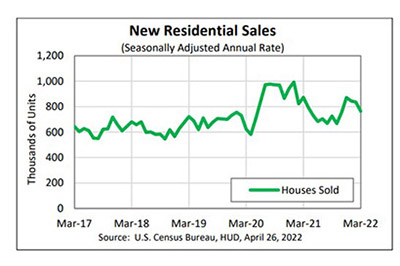 The report said sales of new single‐family houses in March fell to a seasonally adjusted annual rate of 763,000, 8.6 percent lower than the revised February rate of 835,000 and 12.6 percent lower than a year ago (873,000). It marked the largest monthly decline in nearly a year.

Mark Vitner, Senior Economist with Wells Fargo Economics, Charlotte, N.C., noted while this month’s drop was larger than expected, sales for the prior three months were revised substantially higher. Estimates for new home sales for the prior three months were increased by a cumulative 131,000 units. “New home sales bounce around quite a bit from month-to-month, and data from previous months are often substantially revised,” he said.

“While we expect higher mortgage rates to increasingly weigh on sales, demand appears to still be outpacing the speed at which homebuilders can complete construction, with many homebuilders continuing to report that they are limiting the number of orders being accepted,” said Mark Palim, Deputy Chief Economist with Fannie Mae, Washington, D.C. “The current strength of demand hitting up against large construction order backlogs should dampen the effect in the near term of higher mortgage rates, as there appears to be significant unmet home purchase demand.”

The seasonally adjusted estimate of new houses for sale at the end of March rose 407,000, representing a supply of 6.4 months at the current sales rate.