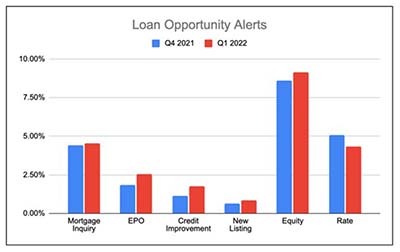 Here is a summary of housing/economic stories that recently came across the MBA NewsLink desk:

Wells Fargo Economics, Charlotte, N.C., said future mortgage interest rate increases depend on two factors: the yield on intermediate- to longer-term Treasury securities and a spread that tends to fluctuate over time.

The analysis notes mortgage rates could continue to trend higher if yields on longer-dated Treasury securities increase further. “In our view, the recent surge in the 10-year Treasury yield should slow markedly, which should dampen upward pressure on mortgage rates,” wrote Wells Fargo Economics Chief Economist Jay Bryson. “We acknowledge that yields on U.S. Treasury securities could potentially rise even further. The past several months have shown that the economic outlook and expected path of monetary policy can change rapidly.”

The Index noted a 5.7% increase in nonprofit-sponsored programs introduced in Q1 2022. Additionally, it reported a 2.3% increase in programs supporting home purchases in defined locales and a 1.3% increase in statewide programs.

Additionally, the Index reported more than one-third of programs do not have a first-time home buyer requirement.

“With affordability on the decline in 79% of U.S. counties and the availability of homebuying assistance on the rise, homebuyers need real estate agents and mortgage lenders to connect them with programs that make homeownership more affordable,” said DPR CEO Rob Chrane.

The report said Mortgage Inquiry, EPO and New Listing alerts all increased in Q1 as consumers actively put themselves in the market for mortgage products. “As the spring buying season picks up, lenders will need to be diligent in their borrower retention efforts, especially those looking to avoid an early payoff penalty,” said Sales Boomerang CEO Alex Kutsishin.

After a significant drop in Risk & Retention alerts in Q4, the category saw a 5.42% increase in alerts in Q1. As more borrowers are flagged for exhibiting risky credit behaviors, mortgage servicers should continue to keep a close eye on their portfolios for default risk.

“A the purchase market heats up, it will be important for lenders not to get tunnel vision, as our data shows increased opportunities in home-equity lending as well,” Kutsishin said.

Fitch estimated home prices in 73% of the country’s metropolitan statistical areas are overvalued; 46% of the MSAs are more than 10% overvalued, compared to only 4% pre-pandemic. In particular, Idaho and Florida remain the most overvalued states. Among the top 100 most populated MSAs, Boise City, Idaho is estimated to be the most overvalued area, followed by Naples-Immokalee-Marco Island, Fla., and Pensacola-Ferry Pass-Brent, Fla..

“As U.S. annual inflation rates have reached four-decade highs, the housing market has been supported by both demand pull inflation and cost push inflation,” Fitch said. “Additionally, the Fed’s interest rate hikes and the stop of asset purchase program pushed up the mortgage rate. With the dual pressure from rising home prices and mortgage rates, housing affordability is worsening. As income inequality intensifies and it becomes more difficult for first-time buyers to enter the market, we are likely to see decreased demand and more downside risk to home prices.”

Zillow, Seattle, said homes with eco-friendly features can sell faster than expected, indicating that today’s buyers are seeking out and competing for more-sustainable homes.

The Zillow analysis found homes with electric vehicle charging stations and drought-resistant landscaping can sell more than nine days faster than similar homes. Features that offer some protection from climate disasters and other natural hazards, such as hurricane shutters or stilts, can help a home sell for more money.

“Climate change is impacting what buyers are looking for in a home and how they want to live,” said Amanda Pendleton, Zillow home trends analyst. “A previous Zillow survey found nearly two-thirds of young adults believe climate change will impact their homes or communities in their lifetime. Those generations are now aging into their prime home-buying years, conscious of their ecological footprint and making purchase decisions based on their beliefs, values and principles.”

Zillow research found large shares of buyers seriously consider flooding (55%), tornadoes (41%), hurricanes (35%), and earthquakes (29%) when choosing a home. The frequency of these severe weather events and other natural hazards is putting a price premium on homes that have features designed to protect against such disasters.

Features that reduce monthly energy bills can help a home sell faster and, sometimes, for more money. Homes with listing descriptions that mention double-pane windows can sell a week faster than similar homes and for 1% more than expected. Homes with solar panels can sell for 1.4% more. Listings that tout programmable thermostats, smart sprinkler systems and smart lights can sell up to six days faster than expected.

ATTOM, Irvine, Calif., released its Q1 2022 U.S. Foreclosure Market Report, which showed 78,271 U.S. properties with a foreclosure filing during the first quarter, up 39 percent from the previous quarter and up 132 percent from a year ago.

The report also showed 33,333 U.S. properties with foreclosure filings in March, up 29 percent from the previous month and up 181 percent from a year ago — the 11th consecutive month with a year-over-year increase in U.S. foreclosure activity.

“Foreclosure activity has continued to gradually return to normal levels since the expiration of the government’s moratorium, and the CFPB’s enhanced mortgage servicing guidelines,” said Rick Sharga, executive vice president of market intelligence for ATTOM. “But even with the large year-over-year increase in foreclosure starts and bank repossessions, foreclosure activity is still only running at about 57% of where it was in Q1 2020, the last quarter before the government enacted consumer protection programs due to the pandemic.”

The Consumer Financial Protection Bureau issued a report on challenges faced by Americans in rural communities. The report said many of these communities lack access to physical bank branches, are more likely to seek credit from nonbanks and are heavily affected by medical bills.

“For decades, many government agencies have turned a blind eye to pressing problems facing families, farmers and businesses in rural communities,” said CFPB Director Rohit Chopra. “The CFPB will be focusing on ways to ensure that rural communities can better access relationship banking services and achieve their economic potential.”

The report said local financial institutions, such as community banks and credit unions, often offer products and services that fit the local economic terrain. However, rural communities are experiencing a fast-paced exodus of in-person banking services, with rural communities 10 times more likely than urban communities to be located in banking deserts. In fact, the Federal Reserve has identified more than 2,100 existing and potential banking deserts across the country with more than 1,500 located in rural areas.

Zillow: Cost of a Mortgage up 20% Since December

Zillow, Seattle, reported the cost of a 30-year mortgage on the typical U.S. home is now 19.5% higher than it was just three months ago.

Despite this, the March Zillow Real Estate Market Report said the pace and volume of sales picked up in March, showing the depth of the pool of home buyers willing and able to meet current asking prices.

Zillow said the typical U.S. home is worth 20.6% more than it was a year ago, the 12th straight month in which a new record for annual home value growth has been set.

“Higher mortgage rates were anticipated this year, but the speed of their rise has been breathtaking,” said Jeff Tucker, Zillow senior economist. “Record low mortgage rates had been an affordability lifeline during the pandemic, keeping monthly payments in check even while prices climbed quickly. March was the biggest test yet of whether enough buyers can meet the new asking prices to keep home values growing at a record pace, and the answer was ‘So far, yes.’ There will be a point when the cost of buying a home deters enough buyers to bring price growth back down to Earth, but for now, there is plenty of fuel in the tank as home shopping season kicks into gear.”

The Zillow home value forecast now calls for 14.9% growth through March 2023, down from a year-ahead forecast of 16.5% growth made in February. Zillow’s existing home sales forecast has been lowered as well, to 6.09 million sales in 2022, which would mark a slight decline of 0.5% from 2021.

Zillow also reported the typical U.S. rent grew 16.8% year over year to $1,904, down from 17.2% annual growth in February, marking the first slowdown in annual rent growth since February 2021.

Redfin, Seattle, said the median monthly asking rent in the U.S. increased by 17% year over year to a record high $1,940 in March, the largest annual jump since at least February 2020.

Meanwhile, the national median monthly mortgage payment for homebuyers rose twice as fast: It climbed 34% year over year to $1,910, also the biggest increase in Redfin’s records.

“Many potential first-time homebuyers are quickly being priced out of the market by record-high home prices and fast-increasing mortgage rates,” said Redfin Chief Economist Daryl Fairweather. “They are then faced with two options: rent or move somewhere with a lower cost of living. Those who choose to rent may save money in expensive housing markets in the near term, but long term, they may have to deal with continued rent increases, year after year. Those who move and buy somewhere more affordable now will be paying considerably more than if they bought last year, but will be able to build equity in the long run and ensure relatively stable monthly housing costs going forward.”