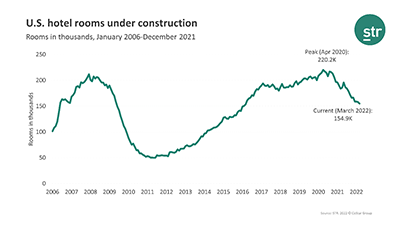 STR, Hendersonville, Tenn., reported hotel rooms under construction fell from one year ago, but noted properties in the planning stage increased significantly.

Detroit and Miami ranked third and fourth in rooms in construction as a percentage of existing supply, the report said.

“New York City has led the development pipeline for quite some time,” said Carter Wilson, STR Senior Vice President of Consulting. “Most of these rooms have been in development since before or right at the beginning of the pandemic, and the hope is their opening will be met with solid levels of recovery in international arrivals, groups and business travelers in addition to continued high levels of domestic leisure travelers.”

In the planning phase, Miami has the highest number of rooms as a percentage of existing supply, followed by Nashville, Phoenix and San Francisco/San Mateo.

“It is no surprise that Miami and Phoenix are showing increased rooms in the planning phase, as both markets have been outperformers throughout the pandemic,” Wilson said. “On the other hand, there’s San Francisco, which has consistently been near the bottom when looking at pandemic performance. The market’s strong positioning in the pipeline seems to imply developer confidence in the return of business and group demand.”