MBA: March Builder Applications Up 10% from February; Down 5% from Year Ago 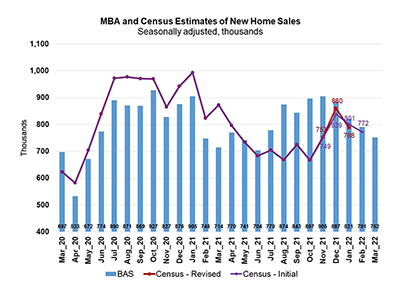 Mortgage applications for new home purchases increased by 10 percent in March from February but fell by 5 percent from a year ago, the Mortgage Bankers Association reported Thursday in its Builder Applications Survey.

This change does not include any adjustment for typical seasonal patterns.

“Mortgage applications for new home purchases increased in March, which is consistent with typical seasonal trends and a sign of strong underlying demand for housing,” said Joel Kan, MBA Associate Vice President of Economic and Industry Forecasting. “Potential buyers have increasingly looked to new homes as an option, given the lack of existing homes for sale.”

The MBA Builder Applications Survey tracks application volume from mortgage subsidiaries of home builders across the country. Utilizing this data as well as data from other sources, MBA provides an early estimate of new home sales volumes at the national, state and metro level. These data also provide information regarding the types of loans used by new home buyers. Official new home sales estimates are conducted by the Census Bureau on a monthly basis. In that data, new home sales are recorded at contract signing, which is typically coincident with the mortgage application.