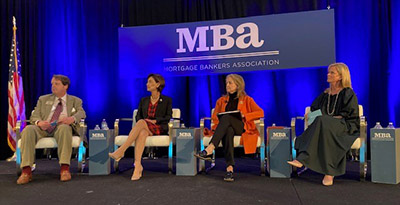 WASHINGTON—One could easily conclude that the political climate here in the Nation’s Capital is permanently broken—divided by polarized ideologies, entrenched leadership and an inability to compromise on the simplest of issues.

And while there is a degree of truth to that—witness the continued posturing over the 2020 elections, for example—in reality, Republicans and Democrats continue to cross the aisle, finding common ground and forming lifelong friendships.

Case in point: Reps. Madeleine Dean, D-Pa., and Young Kim, R-Calif. The two have worked together on several issues—including as original sponsors of the Secure Notarization Act, which would update and modernize notarization for mortgage lending and other business processes—and actively seek out common ground on other issues. And, as they discovered here this week at the MBA National Advocacy Conference, that common ground extends to other aspects of their lives.

Participating in the mPower session at NAC, Dean and Young revealed they were both the youngest of seven children. More poignantly, they noted that they both lost in-laws during the coronavirus pandemic. And they both stressed the importance—and influence—of their families in shaping their views and their commitment to public service.

“My father and mother were very interested in politics and current events,” Dean said. “At my house at the dinner the table we had geography bees, current events quizzes and in the summer we wrote essays that my father graded. We were taught at an early age the importance of politics. My parents volunteered for the Kennedy campaigns. They also made sure to stress the importance of education.”

Dean first ran for office—and won—as an 18-year-old, serving on a local committee in her hometown of Glenside, Pa. After a stint teaching at LaSalle University, she served for several years as a state representative before winning her seat in the U.S. House in 2018.

Young’s journey was similar—and very different. She was born in South Korea. “I remember chasing after G.I. trucks to get chocolate and candy,” she said. “I never thought that 50 years later, I would be here as a member of Congress.”

The family immigrated, Young said, because her parents saw better opportunities in America than in Korea. She finished high school in Hawaii, then enrolled at the University of Southern California, where she earned a degree in business administration and met her husband.

“Our parents told us that this was a land of opportunity, and no matter how hard we work, we could have that opportunity,” she said.

In 1992 Kim went to work for Rep. Ed Royce, R-Calif., and served with him for 21 years. In 2014 she became the first Korean-American elected to the California State Assembly; in 2018, after Royce retired from Congress, Kim ran unsuccessfully for the seat, losing to Democrat Gil Cisneros. However, in a rematch in 2020, Kim defeated Cisneros, becoming the first Korean-American Republican to represent in Congress.

Dean and Young’s shared experiences during the COVID pandemic—they both lost their mothers-in-law early on—helped shape their approach to both life and their work in Congress.

“My biggest takeaway has been humility,” Dean said. “We are very vulnerable and extraordinarily connected. We depend on each other for a lot of things. I tell younger people, ‘You’ll never be as ignorant as I.’”

“We have all had to learn to adapt,” Young said. “I was running for office during the pandemic. We had to learn new ways to fundraise, to connect with voters about what issues they care about. My husband and I spent a lot of time together. We found again our awareness of being with each other—and not killing each other, to agree with each other and to make things work.”

As primary sponsors of the Secure Notarization Act (Dean is a member of the House Financial Services Committee), both recognize how much more important bipartisanship has become, despite the perceived divides between Democrats and Republicans and conservative and progressives.

“It’s a bipartisan bill, and it’s a showcase for how we can do things for the common good,” Dean said. “My ambition is that we will be able to attach it to a larger bill and getting it passed. It’s an important bill—and it’s important for veterans. But it’s also important for the country. I hope it’s a kernel for bipartisan support.”

Young, who is a member of the bipartisan Problem Solvers Caucus, added, “and when I join the Financial Services Committee next year, I will help you get it passed.”

Both representatives had strong advice for anyone—women in particular—interested ni running for office.

“There is no good or bad time to run for office—just do it,” Young said. “I never thought I would be running for office one day. I was working behind the scenes and enjoying it. As an immigrant, I enjoyed helping immigrants in our district. Rep. Royce offered the best advice: ‘if you don’t care who gets credit for things, you can get a lot done.’ I took that advice. A lot of the bills I work on are bipartisan. You can find a lot of common ground with many members of Congress. That’s why I joined the Problem Solvers Caucus. In my first term I got five bills passed; I was glad I was able to do that.”

“Right now, Congress is 24 percent women—it’s not enough,” Dean said. “The population of the United States is 51 percent women. We need better representation. If you have an inkling, then work on a campaign or for a candidate, but feel free to do it yourself. Take the time to say, ‘this is the time for me.’”