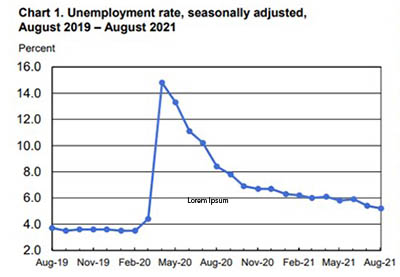 Nonetheless, the unemployment rate fell by 0.2 percent to 5.2 percent. Despite the August slowdown, monthly job growth has averaged 586,000 in 2021, with notable job gains occurred in professional and business services, transportation and warehousing, private education, manufacturing and other services.

The report said the number of unemployed persons edged down to 8.4 million, following a large decrease in July. While both measures are down considerably from their highs at the end of the February-April 2020 recession, they remain above their levels prior to the coronavirus pandemic (3.5 percent and 5.7 million, respectively, in February 2020).

The labor force participation rate, at 61.7 percent in August, was unchanged over the month and has remained within a narrow range of 61.4 percent to 61.7 percent since June 2020. The participation rate is 1.6 percentage points lower than in February 2020. The employment-population ratio, at 58.5 percent, was little changed in August. This measure is up from its low of 51.3 percent in April 2020 but remains below the figure of 61.1 percent in February 2020.

“The increase in employment for August of 235,000 jobs was the slowest month of growth since January 2021 and a significant drop from the upwardly revised 1.1 million job gain in July and 962,000 gain in June,” said Joel Kan, Associate Vice President of Economic and Industry Forecasting with the Mortgage Bankers Association. “Prior months’ data were an indication that employers geared up to meet the increasing demand for goods and services. While we still saw employment growth in August, concerns for the continuing spread of the delta variant have started to impact hiring. Also, this was the first time in six months that leisure and hospitality hiring did not show a gain and the second month in a row that retail trade saw a decline. Overall payroll employment is still 3.5 percent below where it was pre-pandemic. And the leisure and hospitality sector remained 10 percent behind.”

Kan noted construction jobs declined by 3,000 jobs in August, although non-residential construction jobs drove that. “Residential building hiring was flat over the month, while specialty contractors added over 17,000 hires,” he said. “Given the challenges that the home building sector has been facing for building costs and labor shortages, this should continue to support builders’ abilities to sustain higher levels of new construction.”

“Approximately 24% of the jobs lost in the pandemic have not been regained,” said Odeta Kushi, Deputy Chief Economist with First American Financial Corp., Santa Ana, Calif. “If monthly gains continue at the August pace, we could return to the pre-COVID employment peak by June 2023.”

Kushi said attracting skilled labor remains a key priority for construction. “The best attraction and retention policy? Pay more,” she said. “Average hourly earnings in construction are up nearly 4% on a year-over-year basis in August. For comparison, annual wage growth in construction in 2019 and 2020 was approximately 2.9%. Attract more labor and there will be more ground-breaking on new homes.”

Sarah House, Senior Economist with Wells Fargo Economics, Charlotte, N.C., said the toll from rising COVID concerns was evident amid a stalling in the leisure and hospitality sector.

“Labor availability remains an ongoing challenge, illustrated by labor force participation remaining unchanged,” House said. “Wages continue to push higher as a result, but the dampened pace of hiring and bevy of workers still on the sidelines will keep the Fed awaiting more progress on the labor market. Today’s report fully closed the door on the chance of a September taper announcement, in our view.”

Mark Palim, Deputy Chief Economist with Fannie Mae, Washington, D.C., said given the robust job gains in recent months – including large upward revisions to June and July – as well as a rise in COVID-19 cases of late and recent declines in consumer confidence, the step-back in August job growth was not entirely unexpected. “Residential construction employment, including specialty trade contractors, grew by 17,400 in August, up from the prior month; these strong job gains will likely help builders tackle their current backlogs of orders, which we believe should help ease supply constraints in this sector,” he said.

“The data for recent months suggest that the rising demand for labor associated with the recovery from the pandemic may have put upward pressure on wages,” the report said.