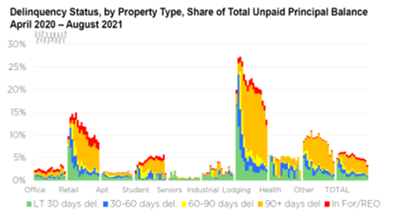 “Delinquency rates for mortgages backed by commercial and multifamily properties have broadly improved in recent months as the U.S. economy continues to heal from the COVID-19 pandemic,” said Jamie Woodwell, MBA Vice President of Commercial Real Estate Research. “Performance is still property-type dependent, with the properties that saw the most immediate and dramatic impacts from the pandemic–lodging and retail–still experiencing considerably more stress than others but showing improvement. Delinquency rates are down significantly for those property types and remain muted for others.”

Note: The survey includes a range of delinquency measures, but for the purposes of understanding the impacts from the pandemic, any non-current loan is generally treated as delinquent).

The balance of commercial and multifamily mortgages that are not current declined in August.

Because of the concentration of hotel and retail loans, commercial mortgage-backed securities loan delinquency rates are higher than other capital sources.

Commercial and multifamily mortgage delinquencies declined in the second quarter.

MBA’s analysis incorporates the measures used by each individual investor group to track the performance of their loans. Because each investor group tracks delinquencies in its own way, delinquency rates are not comparable from one group to another.

Differences between the delinquencies measures are detailed in Appendix A. Click here to view the report.