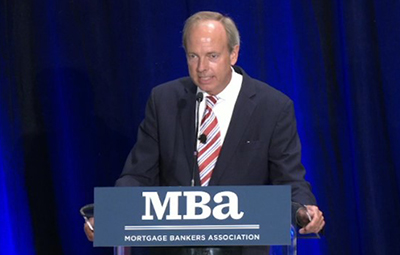 “This is a consequential week in Washington as it relates to the second infrastructure bill, funding the federal government after the fiscal year ends on Sept. 30 and passing a debt ceiling debt ceiling extension which will have to happen before October,” Broeksmit said. “We are squarely focused on the ‘pay-fors’—what are the revenue-raisers that will enable this infrastructure spending?”

In the first “live” MBA conference since onset of the coronavirus pandemic in 2020, Broeksmit said many issues remain in flux, because of ongoing partisan negotiation and the recent change in administrations. He noted the Biden Administration has a decidedly different approach to the previous administration from a regulatory standpoint.

“[Since] the election, there’s been a snapback, regulatorily, where regulatory styles have reverted to 2009-2016, and the White House and federal agencies are much more hands-on regarding consumer complaints and enforcement,” Broeksmit said. “Acting CFPB Director [Dave] Uejio and Director-nominee [Rohit] Chopra have certainly been active and this and we expect once Mr. Chopra is up for his confirmation that the Bureau will continue that path.”

Broeksmit said MBA remains focused on preserving mortgage servicing rights—”making sure they are not penalized in some sort of minimum book tax scheme, where the GAAP earnings would create your tax liability, instead of your cash earnings, which all of you know, when you book an MSR you don’t get the first dollar until the borrower makes the first payment,” he said. “Paying taxes on the lifetime flow of money before you get the first dollar would be profoundly unfair, and we’re getting a very good hearing on both side of the aisle but we’re being vigilant and want to make sure that holds.”

Broeksmit also wants to see the logjam broken on homeowner rental assistance programs. “You don’t hear much about this because there’s been such a disaster in the rollout of the rental assistance and the eviction moratorium and extension after extension instead of getting the darn governors to get the rental assistance out is taking up all the headlines,” he said. “But there is also $10 billion in homeowners assistance that we helped lobby for and we are working closely with the state housing finance agencies to make sure that can be used to help people who can’t quite pencil-out a modification as they leave their forbearance period.”

Broeksmit praised the industry for its resilience during the pandemic. “The accomplishments that we as an industry had—and I’d like to think, led by MBA—through the pandemic, I think are truly remarkable,” he said. “We are always a forward-looking industry and sometimes we fail to pause and take stock. And remember in 2020 what it felt like when our ability to make mortgages and put people in homes was challenged on every front simultaneously. How do you make a mortgage when the appraiser doesn’t want to go in the house—or more to the point, when a homeowner doesn’t want some stranger tromping through? And how do you close a loan when nobody wants to go into a conference room and shuffle through stacks of paper with other people? And how do you get good title when the county courthouses are closed? And how do you verify employment when no one is in the office?”

Broeksmit said these obstacles “hit us like a barrage.” And the results, he said, were remarkable. “And what our mortgage industry did was, without a dime of taxpayer money, give billions of dollars of stimulus and relief to Americans through refinancing—of course, the Fed led the way by reducing rates, but that doesn’t help the consumer—your lenders, your companies are the ones that translate that into consumer good and bring this economy back,” he said. “I’m proud to say that the housing industry has resumed its rightful role as an engine, leading the economy out of recession, rather than what happened during the Great Financial Crisis.”

Broeksmit commended MBA staff for working very closely with the industry and our government partners in a really exemplary showing of private/government cooperation. We were on the phone with FHFA, Fannie/Freddie, USDA, VA and FHA all the time—in fact, we had a standing call with the GSEs and FHFA every Tuesday and Thursday—to identify obstacles, work through solutions and implement them lightning-fast—which is not the typical pace in Washington–and permit the biggest year in the history of mortgage banking.”

Working with FHFA has been particularly interesting over the past couple of years, Broeksmit said. “The Supreme Court decision gave the President the ability to remove the director [Mark Calabria] not for cause, which he did the same day of the decision,” he said. “And Acting Director [Sandra] Thompson has been in place for several weeks now. We very helpfully delivered a list that RESBOG primarily authored of all the things we think she ought to do and had a very productive meeting with her. We think we’re aligned on a lot of that and think she is doing a great job. Two of the first things she did was on our list; one was to get rid of the maximum LTV on flex-mods for Fannie and Freddie; and more importantly or broader impact was the final nail in the coffin on my favorite fee, the adverse market refinance fee, which as you know went into effect last year in a way that would have cost our members hundreds of billions of dollars because Mr. Calabria didn’t protect your pipelines.”

Broeksmit also noted MBA has been advocating for a several years to have the way that student debt is treated by FHA to be at least with parity to the way that Fannie/Freddie/VA/USDA treat it. “As you know, FHA has had a very punitive way of including student debt in the debt-to-income ratio, depriving a lot of borrowers from FHA financing,” he said. Who is most likely to have student debt? Minority borrowers, black and Hispanic, chiefly. And who are the chief beneficiaries of the FHA program? Those same borrowers. So, it was really dissonant to have this treatment of student debt, and one of the first actions that Secretary [Marcia] Fudge took was to take our recommendation and make that much more in line with the other agencies, so we’re very happy about that.

Broeksmit added he is excited to have MBA meetings back in person and looks forward to seeing MBA members in San Diego next month for the MBA Annual Convention & Expo.