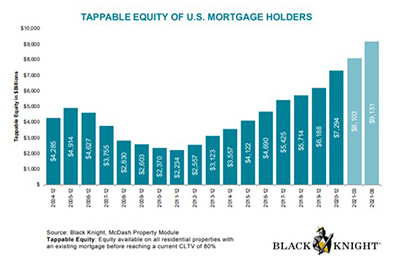 The company’s monthly Mortgage Monitor report said the average mortgage holder now has $173,000 in tappable equity available to them, an increase of $20,000 from just the end of the first quarter.

The report said fewer than 3% of mortgage holders have less than 10% equity – the lowest share ever observed – with the overall weighted average CLTV now 46%, the lowest mortgage-to-value leverage on record

And according to Black Knight, homeowners are taking advantage of their new-found equity: More than $63 billion in equity was withdrawn via 1.1 million cash-out refinances originated in the second quarter, the largest quarterly volume since mid-2007.

“U.S. homeowners with mortgages gained another $1 trillion in tappable equity in the second quarter alone,” Graboske said. “This is by far the strongest growth we’ve ever seen.”