Broeksmit: MBA ‘Working Hard for You’ 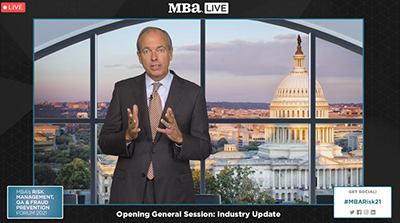 Mortgage Bankers Association President & CEO Robert Broeksmit, CMB, kicked off the MBA Risk Management, QA and Fraud Prevention Forum with a tacit acknowledgement that the past year has been the busiest for the real estate finance industry in years.

“COVID-19 put risk management, quality assurance and fraud prevention at the forefront of real estate finance,” Broeksmit said Tuesday during the Forum’s opening general session. “From the moment the pandemic hit, you were called into action to an unprecedented extent. Not only did you quickly adopt new standards and practices, but you also did so at a time of record-breaking volume.”

Broeksmit noted many in the industry have been working 12-to-18-hour days, six to seven days a week. “It’s been tough. But you toughed it out,” he said. “And despite all the challenges you faced, you made your companies and our industry stronger. I applaud your leadership, and I respect your work ethic. It’s an honor to represent you in our nation’s capital.”

In turn, Broeksmit said, MBA has been working hard for the industry. “Like you, we’ve spent the better part of the pandemic putting in extra hours to get the job done,” he said. “Also like you, we’ve accomplished some impressive feats on behalf of the industry.”

Broeksmit cited a number of MBA legislative and regulatory victories for its membership in the past year, including:

—Federal Housing Finance Agency Adverse Market Refinance Fee. “FHFA proposed this fee last summer; MBA and our members immediately opposed it,” Broeksmit said. “We did so because the fee would hurt homeowners trying to make ends meet. It was the wrong policy at the wrong time, and we said as much to the federal government. After many conversations with MBA, FHFA delayed the fee’s adoption so that lenders could at least clear the committed loans they had in their pipelines. But even after the fee went into effect, we kept talking with officials in the new Biden administration. In July, FHFA canceled the fee outright. The adverse market refinance fee is off the table altogether.

—FHFA Preferred Stock Purchase Agreements. “In January, during the waning days of the Trump Administration, FHFA imposed major limits on the GSEs’ ability to acquire loans secured by second homes, investment properties and other factors,” Broeksmit said. “We made clear that the limits hurt your customers and cause disruption in housing finance. We asked for a meeting with top officials. They agreed. Once we met, the MBA made the case for change. We also laid out a commonsense path to enacting that change. It was a good meeting, and I could tell that we got our message across. It’s really your message.”

Earlier this month, Treasury and FHFA suspended most of the limits. “It’s a big win,” Broeksmit said, “but our work isn’t done. While the suspensions are in effect, officials are considering further changes to PSPAs. MBA will keep fighting to get the best policies possible.”

“We’ve had a great bond with [Thompson] going back years,” Broeksmit said. “She gets it. Just as you are risk managers for your companies, Director Thompson is the risk manager for the GSEs. She essentially does what you do, and she does it well. The Acting Director supports FHFA’s mission of increasing the availability of housing and access to credit. She also has impressive experience and deep knowledge of housing finance. The MBA strongly agrees with her stated goals of keeping the GSE’s strong, safe and sound.”

—Relationships with Other Key Players. Broeksmit noted President Biden recently nominated Julia Gordon to lead FHA. “She is a longtime member of MBA’s Consumer Affairs Advisory Council, and she’s deeply committed to protecting taxpayers, improving efficiency, instilling certainty and bringing more lenders back to the FHA program. These are all MBA priorities, and we look forward to working with her to make progress, just as soon as she’s confirmed,” he said.

—FHA Advocacy. FHA recently extended the timeline for implementation of changes to its Servicing Guidelines. This will give servicers more time to adopt and comply with what is a complex new rule,” Broeksmit said. “The new Student Debt Policy is another positive step. It helps creditworthy low-to-moderate income and first-time buyers qualify for loans. It also allows lenders to underwrite an FHA mortgage using more accurate estimates of a borrower’s actual monthly student debt payments. That’s our lifeblood – helping borrowers own homes – and you’re now in a better position to do more good for more people.

Looking ahead, Broeksmit said MBA is well-positioned to tackle the biggest policy challenges of the near future. “We’re part of the conversation, whenever and wherever it happens,” he said. “We’ve spent decades building bonds with leaders on both sides of the aisle. And not only did we have a strong relationship with the Biden team before they took office, it has only grown stronger since January.”

Broeksmit said MBA is playing “offense” on housing affordability. “And we’re playing ‘defense on a variety of potentially harmful policies. There’s an element of both in most of the big legislative proposals that Congress is considering. While congressional majorities are the slimmest of slim, we still expect major legislation to pass. We’re working around the clock to ensure those bills reflect your priorities.”

A good example is the $3.5 trillion infrastructure bill moving through Congress right now. “While tax increases are inevitable, we’re fighting to make sure they don’t hurt our industry,” Broeksmit said. “We’ve established a blue-ribbon task force representing all facets of real estate finance. It’s helping lawmakers see what tax hikes are harmful. We’re also lobbying Congress directly, and we’re already seeing results. The most recent bill excluded tax hikes on 1031 Like-Kind Exchanges, a minimum book tax that would have hit mortgage servicing rights, and adverse capital gains treatment for the sale of owner-occupied real estate. That’s good for you, and your customers.”

MBA is also heavily focused on the Consumer Financial Protection Bureau. “I don’t have to tell you that we’re looking at a ‘snap back’ to the regulatory style of 2009-2016,” Broeksmit said. “We’ve entered another era of less guidance and more enforcement. That’s already clear under Acting Director Dave Ueijo. It will be just as true when Rohit Chopra is confirmed.”

But Broeksmit said MBA can still make progress. “The Bureau’s recent servicing and foreclosure rules for borrowers coming out of forbearance were much better than the initial draft; we helped steer them in a better direction,” he said. “And we’re confident we can continue to work constructively with the CFPB on other critical policies. We’ll closely monitor the Bureau’s proposals.

MBA will also continue to monitor the industry’s response to forbearance exits and eviction moratoria. More broadly, Broeksmit said, MBA will continue its work on technology initiatives, including Remote Online Notarization legislation. At the state level, MBA will focus on Community Reinvestment Act and remote-work issues.

“And last but not least, we’ll maintain and build stronger bonds with regulators,” Broeksmit said. “That means Secretary [Marcia] Fudge at HUD and leaders at the CFPB, FHFA and so many agencies and departments. In addition to Julia Gordon at FHA, we’re pleased that Alanna McCargo is the nominee to lead Ginnie Mae. She has a long history with us and an even longer track record working with and in the industry. It’s one more relationship that will lead to results for you.”

Broeksmit noted this is the second year the RMQA Summit has been held virtually. “It should be the last,” he said. “MBA is restarting in-person conferences – starting with Annual [in October]. I look forward to seeing many of you there, and I am already excited to see you at RMQA 2022.”