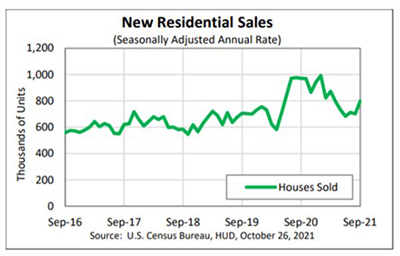 New home sales jumped by 14 percent in September, HUD and the Census Bureau reported Tuesday, showing no signs of the traditional fall slowdown.

Kushi said September’s strong gain in new home sales provides the first sign that the many supply constraints currently affecting builders may be starting to ease. “Since peaking in the spring, lumber prices have come down markedly,” she said. “Lumber accounts for a significant share of the overall cost of new home construction, so builders are likely under less pressure to pass on rising costs through higher prices…While builders may be finding ways to navigate around the mounting supply-side challenges, it is by no means smooth sailing. Tangled supply chains caused by shortages of shipping containers, cargo space and transportation workers have led to increasingly long lead-times for procuring many building materials. The inability to find qualified workers has compounded the issue, leading to extended project timelines and delayed completions.”

Mark Vitner, Senior Economist with Wells Fargo Economics, Charlotte, N.C., agreed. “The monthly surge in sales, which easily topped consensus estimates, is a sign that builders are finding ways to navigate around shortages of building materials and qualified labor,” he said. “The robust pace of activity will calm concerns that the slowdown in sales experienced during the spring would extend throughout the remainder of the year.”

However, Doug Duncan, Chief Economist with Fannie Mae, Washington, D.C., noted while the size of the increase was more than expected, “the data series tends to be volatile, and it coincided with sizable downward revisions to the prior two months.”

“Taken as a whole, the report continues to reflect the ongoing story of strong housing demand confronting a tight supply of homes available for sale, as homebuilders face difficulties working through their order backlogs,” Duncan added. “The good news is that despite the jump in sales, the total amount of homes left for sale at the end of the month remained flat at the highest level since 2008, suggesting homebuilders are finding sufficient lots to generate a higher pace of sales going forward. However, ongoing supply chain disruptions and labor scarcity are limiting the pace of construction completions.”