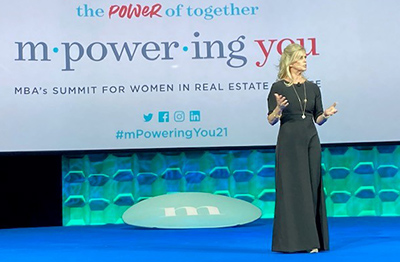 “When I think of the mPower community, I think of how we can continue to support each other,” Davies said here at mPowering You: MBA’s Summit for Women in Real Estate Finance. “Helping each other in good times in bad; supporting each other through thick and thin; and loving each other when the going gets rough…I’ve never needed mPower more than I need it now.”

Since its inception, mPower, MBA Promoting Opportunities for Women to Extend their Reach, has become the largest networking organization for women in real estate finance. mPower now boasts 25,000 engaged members and sponsors more than a half-dozen events each year at MBA conferences—including mPowering You, a day-long event ahead of the MBA Annual Convention & Expo that attracted more than 400 attendees Oct. 16 in San Diego.

“Marcia did not fabricate the need for mPower—she recognized it,” said Christy Moss, CMB, Head of Sales and Marketing with FormFree, Duluth, Ga. “She was already a busy professional, but her professional impact was the result of mPower’s success.”

“We’re here to day to move forward—to move past the challenges of the past 18 months,” Davies said. She discussed barriers she faced early in her career. She noted the death of her father left her family in difficult straits—the money dried up; her first marriage failed; and she struggled to regain her independence.

“I had to start over,” she said. “I started to save a little money each week—just enough to move out and get her own apartment.

In 1984, she joined what became Freddie Mac. “I’ve been in this industry for 33 years—this industry saved me,” Davies said. “It helped me come through a crisis 33 years ago, and it has helped me now.”

The pandemic was a time of isolation and frustration,” Davies said. “There were times when I didn’t know how we were going to get through,” she said. “But our strength is how we get through challenges. Never back down and always push forward.”

The pandemic changed everything, Davies said. “For the past 18 months we pushed ahead,” she said. “It feels like we have to work even harder to get ahead. The workplace has changed, and the old rules no longer apply. So, we need new rules.”

—Speak Out. “Be honest about whay you need,” Davies said. “We have to be honest with our employers—tell them what you need to succeed.”

Davies observed that mental health issues emerged more prominently during the pandemic. “It’s important that you take care of yourself,” she said. “Speaking out isn’t just a 9-5 to thing; it isn’t just a work thing. It’s as important at home as it is at work.”

—Show Up. “After 18 months, it’s time to get back into the swing of things,” Davies said. “We lost a lot in the past 18 months—personal relationships, work processes. And work from home is here to stay. I’m all for flexibility—but I’m also all for showing up. We have to show up, and we have to show up strong. Now is no time to fade in the background—now is the time to be visible. Now is the time to be at the top of our game—we need to show up.”

—Go Above and Beyond. “It’s nice that normalcy has returned—but it’s not the same, and it’s not going to help us get ahead,” Davies said. “No matter what we face, we cannot let our career goals stall. The mPower community is about being the best we can be, so the goal is not where we are, but where we are going to be.”

—Lift as We Rise. “We are not here to just help ourselves—we are here to help each other,” Davies said. “And if we don’t break through these barriers, we can’t help each other.”