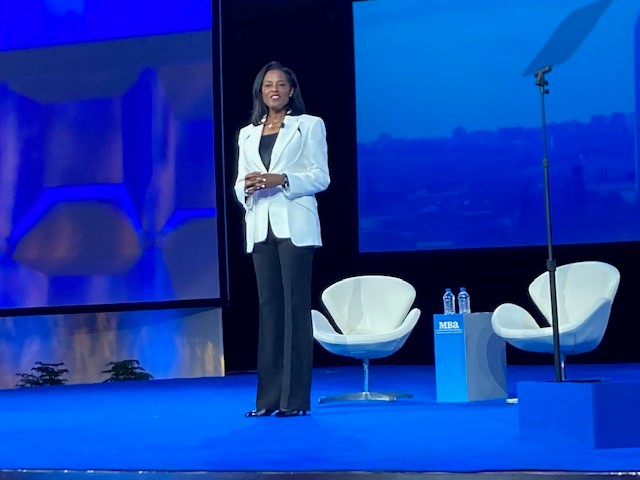 “Right now, I’m able to say, ‘I’m the only one of me,’ and that’s not a good thing,” Fercho said Monday here at the MBA Annual Convention & Expo. “We need to do more to build a pipeline of talent so that in five years, we have more people from diverse backgrounds– not only in leadership, but at every level. It’s the right thing to do– and this is the right time.”

As MBA Chairman, Fercho is hitting the ground running. She announced two priority issues over the next year: expanding minority homeownership; and improving employee diversity in the mortgage industry. Characteristically, she has a plan.

Last summer, after the murder of George Floyd, Fercho said she promised herself to do even more to advance equity and equality. “I knew I couldn’t solve every problem, but I could help address the issues in housing,” she said. “In my interviews with Wells Fargo, when asked why I wanted the job, my response was simple: ‘I want to put more Black and Brown people in homes, and why not do it from one of the biggest mortgage platforms in America.’ They said they wanted the exact same thing, and since I started, they’ve given me the resources and support I need to succeed.

Fercho said MBA members understand why this issue matters. “Homeownership is the number-one wealth-building opportunity for virtually every family in America, but minorities have often been denied that opportunity,” she said. “We have an obligation to right this wrong and help them own a home and own their futures. And there’s never been a better time. We’re at a critical moment in history when the White House, Congress, our industry and community advocates all agree it’s time to address the systemic challenges that hold back minority homeownership. It’s incredible. We have to make the most of this moment. We will make the most of this moment– I promise you that.”

Fercho said her second goal—improving diversity—is essential to the future of the real estate finance industry.

“Right now, there are a lot of Black and Brown kids out there who don’t know what they’re capable of; they don’t know about our industry or appreciate how rewarding a career in mortgage or commercial banking can be,” Fercho said. “We can help them find it, and give them the chance to contribute.”

“I’m proof of what’s possible,” Fercho added. “The only reason I’m standing here is because a lot of people helped me rise. They believed in me when I didn’t believe in myself. They helped me climb when I didn’t think I could reach the next rung. They gave me opportunities and supported me through thick and thin. We can all do the same thing for the next generation.”

Fercho said not only is there a moral need to improve diversity, but also a business need. “America is on track to become majority-minority,” she said. “Our companies should reflect our country and the communities we serve. They don’t today. We all know it’s easier to understand the needs of the community when we live in them and look like them. And on that front, we have a way to go.”

Right now, I’m able to say that “I’m the only one of me,” and that’s not a good thing. We need to do more to build a pipeline of talent so that in five years, we have more people from diverse backgrounds– not only in leadership, but at every level. It’s the right thing to do– and this is the right time!

Fercho announced MBA will offer the Home for All Pledge– a pledge to promote inclusion in housing for all our members (see related story in today’s MBA NewsLink).

“By signing this pledge, you and your companies will commit to promoting minority homeownership and a more diverse workplace,” Fercho said. “It has specific actions you can take on both fronts– from public policy to industry practices. And signing it is just the first step. Once you do, the MBA team will help you identify concrete next steps you can take. We want to help you do what’s right for your business and the communities you serve. A number of MBA members have already signed the pledge. I thank them for their leadership and hope their example inspires you to do the same. My fellow members of the MBA, we have a chance to make a difference. The time has come to act. And I know that we will lead the way.”

Fercho said she is honored to serve as Chairman of MBA. “It’s also a great responsibility,” she said. “As MBA Chair, the first priority I have is you. Full stop. I’m here to serve you. I’m here to strengthen you. And I don’t just mean for the next year alone. I want to help you thrive for years to come.”

Fercho added in the post-pandemic environment, she plans to be an active and visible representative for MBA.

“I couldn’t be more excited for what we have in store,” she said. “And I couldn’t be more honored to serve you in this role. Thank you for entrusting me with this responsibility. In the coming weeks, I’ll hit the road to meet with as many of you as I possibly can. I’ll go to states and cities across the country, and wherever I go, I’ll listen to you and learn from you. Everything I do will revolve around you. You and your companies are a force for good, and I want to help you do more good for more people, across the board. That’s my mission, and that’s the mission of the MBA. I look forward to fulfilling it. And I look forward to the incredible things we will accomplish together.”

(To learn more about Kristy Fercho and her journey from her childhood in Compton, Calif., to her meteoric rise in the mortgage industry, click Kristy Fercho Takes Charge in the Oct. 15 MBA NewsLink eShow Guide; or the longer story in the print version, sent to all attendees of the MBA Annual Convention & Expo).