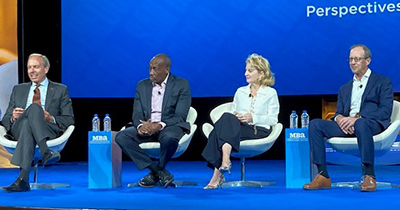 The annual Perspectives from the C-Suite session here at the Mortgage Banker Association’s Annual Convention & Expo is always a good opportunity to take the pulse on what’s on the mind of mortgage executives. This year’s session was no exception.

The post-pandemic atmosphere is top of mind. “We’re very excited about the direction of the industry,” Boston said. “We [Dynex] were built for remote work—I’ve been working remotely for 17 years. The world has come to us—I have more options for meeting people; more opportunities for doing businesses. There are dialogues and business methods that should be taking place.”

“One of the things we talk about is that the mortgage industry is slow to adapt, and I am pleased that we saw that we can change quickly,” Stewart said. “But there is something about that communal time that makes for a happier environment. But we are excited about just how quickly we were able to move and adapt.”

The pandemic also caused a shift in leadership approach. “With my staff I became very visible, particularly after George Floyd,” Boston said. “I shared my own stories with my colleagues and listened more. It took leadership; and in the toughest moments, you have to lead.”

“You always have to have your ‘game face,’” Stewart said. “No matter the situation, we found we couldn’t have 750 people on a Zoom call. We adapted. We had team calls because we knew the situation was so different for different people. When you’re a leader you don’t get to burn out.”

“Pre-pandemic, I was not a big fan of remote work,” Wind said. “But we’ve flipped on that, and now we recognize the value of remote work, and our challenge now is how to keep it working for us. It’s about how you connect with people, and we’ve worked hard at that and do it better than before. It’s a different way of working and when you put it all together, we’ve been able to keep the culture going. It’s nice to have people in the office, but we were able to adapt and improve.”

“I’ve been fortunate at MBA,” Broeksmit said. “I went into the office every day and I felt that even if the world was shaking under my feet, I had my office as an anchor.”

The housing market is shifting—the refinance boom is projected to wane as purchase originations increase. “The demographics are favorable, too,” Wind said. “I’m optimistic about mortgage going forward. Clearly, we are going to have to manage expenses and improve customer service in a purchase market and make investments to connect with people, and leverage all the data we have about how to connect with customers early in the home buying journey. And this is what we have to do.”

“Data is key going forward,” Stewart said. “The shift from refi to purchase is a matter of getting your head in the right space, and getting your employees focused so that they don’t get burnt out. We’re looking ahead to what we’re going to do a year from now or two years from now.”

“The pandemic was not a black swan event,” Boston said. “At Dynex Capital, we are protected for unpredictable events. We’re only going to get certain investors. We have to be flexible so we can make flexible decisions.”

Closing the homeownership gap and building generational wealth has been a particular passion for Stewart, who made affordable housing and minority homeownership a cornerstone of her tenure as MBA Chairman.

“Do it because you’re smart; do it because it’s right,” Stewart said. “We have to deal with inventory; we have to deal with credit; we probably have some solutions out there, but we have to make a commitment on how to provide education from the very beginning all the way through the process. I’m super-optimistic about this because it’s an imperative—we can’t keep kicking it down the road.”

Having said, that, Wind said, “there are limitations as to what we can do. When we take a look at the forbearance activity that has happened and the industry’s response, we did a very good job. The next step is about education and working with community groups. We’re also looking at our cost structure as well—how we can drive down costs so that we’re not part of the affordability problem. We have a long way to close that gap, but the ability to use technology to drive down costs can go a long way in expanding opportunities.”

“Creative ideas are more than welcome,” Boston said. “We as a country and as a people need it, because there are a more desperate group of people who are being stripped of their wealth because of rising costs.”

Diversity, Equity and Inclusion has also intensified in scope. “We have a diverse company,” Boston said. “I’ve always operated from the standpoint that if you’re a guy, and you’re not interested in hiring women, then I have an advantage over you. There’s a broad pool of talent; why would I limit myself?”

“We have pretty broad representation at the senior level; when you get to the lower levels, that’s where the challenge is,” Stewart said. “We’ve had some success in hiring people from other ethnic groups and getting them into our business—particularly those who never had any experience in the industry—we hired one person who had been a bartender for nine years.”

“There are not just enough minorities in the business,” Wind said. “After the George Floyd incident in Minneapolis, we launched a program at improving Black homeownership, but we also tried to make a difference from an employee perspective—hiring people without mortgage backgrounds and training them. It’s about improving the pool.”

Asked what major issues still need to be addressed, Wind and Stewart sounded similar themes. “I feel like [the industry has] a lot of momentum—now we have to bring our employees along the journey,” Wind said.

“Legacy thinking is something we have to be more aggressive about,” Stewart said. “We talk a lot about who the disrupters are, but we really have to talk about making the change, make it quickly and bring everyone along—but doing that is difficult. The big challenge is bringing people along. There’s a much better future, but we have to make it.”

“Be a good human,” Boston said. “Human conflict is my biggest concern and it has produced enormous surprises in our history. But it can be done. It’s okay to share; it’s okay to leave a good tip. Carry the mantelpiece of being a good human and show it to your employees and your customers.”