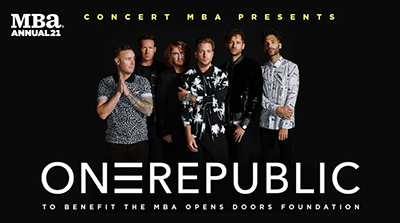 OneRepublic will take the stage for Concert MBA at the Mortgage Bankers Association’s Annual Convention & Expo to benefit the MBA Opens Doors Foundation.

The band’s sophomore album—2009’s Waking Up —produced the hit singles “All the Right Moves,” “Secrets” and “Good Life.” The certified-platinum album Native followed in 2013, featuring the No.1 hit and multi-million-selling single “Counting Stars.”

OneRepublic released Oh My My, its fourth full-length album, in 2016. OneRepublic has amassed five billion streams on Spotify to date. OneRepublic’s latest album, Human, dropped on August 27. It features singles, which combined have more than 2.5 billion global streams: “Somebody,” “Run,” “Somebody to Love,” “Wanted,” “Didn’t I,” “Better Days” and “Rescue Me,” which has been certified RIAA Gold.

You know their music – now you can catch them live on the Concert MBA stage. We’re so excited to be TOGETHER AGAIN in person for live music, networking, learning and more, October 17-20 in San Diego.

The concert will benefit the MBA Opens Doors Foundation, dedicated to providing the comforts of home to families in crisis. Through the Foundation’s home grant program, MBA provides mortgage and rental payment assistance grants to parents and guardians caring for a critically ill or injured child, allowing them to take unpaid leave from work and spend precious time together without jeopardizing their cherished homes.

Since 2012, the MBA Opens Doors Foundation has provided mortgage and rental payment assistance grants to more than 6,500 families from across the country. Because the Mortgage Bankers Association pays 100% of the Foundation’s operational and administrative expenses, 100% of donations go directly to a family in need.