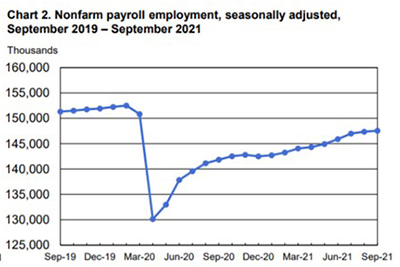 Total nonfarm payroll employment rose by 194,000 in September—well below expectations—but the unemployment rate fell by 0.4 percentage point to 4.8 percent, the Bureau of Labor Statistics reported Friday.

Notable job gains occurred in leisure and hospitality, in professional and business services, in retail trade and in transportation and warehousing. Employment in public education declined over the month.

In addition to the drop in the unemployment rate to 4.8 percent, BLS said the number of unemployed persons fell by 710,000 to 7.7 million. Both measures are down considerably from their highs at the end of the February-April 2020 recession; however, they remain above their levels prior to the coronavirus (COVID-19) pandemic (3.5 percent and 5.7 million, respectively, in February 2020).

“Job growth remained lackluster in September following similarly disappointing gains in August,” said Mike Fratantoni, Chief Economist with the Mortgage Bankers Association. “Although private sector job growth was at 317,000, and several categories showed gains – including professional services – there was a large drop in education employment. This was a byproduct of school hiring still being relatively weak compared to the typical seasonal patterns. The household survey showed a stronger, 526,000 increase in employment over the month, indicating that the payroll survey may not be capturing all the recent employment gains in the economy.

Fratantoni said the ongoing decline in the unemployment rate, and the rise in wage growth, “is good news for the housing market, as it will continue to support strong housing demand. With 7.7 million people unemployed and looking for work, and a record 10.9 million job openings, we expect the unemployment rate will continue to drop over the next year,” he said. “It was also positive to see the number of long-term unemployed fall by almost 500,000 last month.”

Fratantoni added the drop in the unemployment rate below 5%, and the other indicators of job market strength, are likely to be sufficient for the Federal Reserve to move forward with tapering their asset purchases. “This will likely lead to modest increases in interest rates, putting additional pressure on housing affordability at a time home-price appreciation is still very high,” he said.

“Hiring was not quite as weak as the headline implied, due to tough seasonal factors in the education sector,” said Sarah House, Senior Economist with Wells Fargo Economics, Charlotte, N.C. But [Friday’s] report underscores that labor availability remains the biggest challenge to hiring right now.”

House noted demand remains exceptionally strong and employers continue to struggle to fill positions. “We expect to see the labor force participation rate, particularly for prime-age workers, to bounce back in comings months,” she said. “But September’s drop in participation underscores that frictions remain prevalent and the jobs recovery will take time.”

Doug Duncan, Chief Economist with Fannie Mae, Washington, D.C., also noted the “marked deceleration” in residential construction employment. “More robust job growth will be needed to help builders work through their current backlog of orders, which we believe should help to ease supply constraints in this sector,” he said.

–Total nonfarm payroll employment increased by 194,000 in September. Thus far this year, monthly job growth has averaged 561,000. Nonfarm employment has increased by 17.4 million since a recent trough in April 2020 but is down by 5.0 million, or 3.3 percent, from its pre-pandemic level in February 2020.

–Average hourly earnings for all employees on private nonfarm payrolls rose by 19 cents to $30.85 in September, following large increases in the prior five months. Average hourly earnings of private-sector production and nonsupervisory employees rose by 14 cents to $26.15. BLS said data for recent months suggest the rising demand for labor associated with the recovery from the pandemic may have put upward pressure on wages.