mPowering You: Why Not You? Gen. Nadja West on Perseverance and Breaking Boundaries 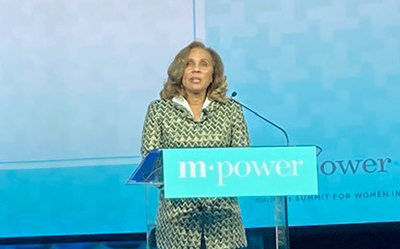 SAN DIEGO—Gen. Nadja West’s story is one of grit, perseverance, strength and breaking boundaries in the face of adversity.

Speaking here at mPowering You: MBA’s Summit for Women in Real Estate Finance, West shared her remarkable journey: adopted as the youngest of 12 in a military family; going to college; becoming a medical doctor and the first African American woman three-star General in Army history.

Over her career, she cared for sick and wounded soldiers as a field surgeon in Operation Desert Storm; as a general, she supported more than four million people globally as Army Surgeon General.

“If this COVID crisis has taught us anything, it’s the importance of working together,” West said.

In 1978, as a “plebe” (freshman) at the U.S. Military Academy at West Point—just the third class the included women—West said she confronted her doubts. “To the casual observer, I looked like another cadet,” she said. “But 10 times a day, I asked myself, ‘why am I here?’”

West decided to stop wasting her time worrying. “I realized that West Point trained great Army leaders—something that women before me never had the chance to do,” she said. “I had three sisters before me who never had the opportunity. I decide to embrace that opportunity.”

West graduated from West Point, completing Airborne School. “I did it because I prepared myself for everything,” she said.

Following West Point, West enrolled in medical school; when Operation Desert Storm commenced, she interrupted her medical residency to serve on a forward infantry brigade camp in Saudi Arabia. “I definitely had to be brave, because I had a mission, and people were depending on me,” West said. “I was able to put aside my fears and lack of confidence.”

At the time, the military had a combat exclusion rule in the belief that females should not serve in combat situations. West said she benefited from a commander who chose her on her merits. “It was one of the reasons I made such a long commitment to the Army,” she said. “He was ahead of his time.”

West’s career continued on a steady projection—running military hospitals in Germany and Virginia, eventually becoming a three-star general with broad responsibility over large swaths of the Army’s health administration.

“One of the most important characteristics I learned to have is empathy,” she said. “To gain empathy and be empathetic for others, you have to be able to walk in other peoples’ shoes.”

Today, “leadership is more important than ever,” West said. “We can influence our families, our peers and others, either by word or by example. We are all leaders—even though we might not be in charge—and we need to be leaders in a post-COVID environment.

West said it is important to focus—not just the job, but also the mission. “This gets harder the higher up you go,” she said. “I tried to understand that each person is unique, precious and unrepeatable, and they add value to who they are. “If you can provide purpose, motivation and leadership, then you will succeed.”

West encouraged people to get out of their comfort zone. “Do something every day that challenges you, that makes you uncomfortable, that you didn’t think you could to,” she said. “When you discover that you can do it, you can thrive on it and develop agility.”