Bazemore: ‘We Have to Believe It’s Possible’ 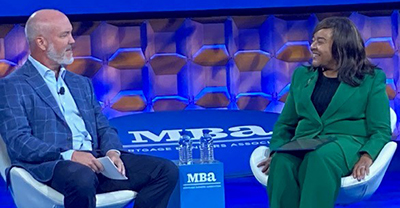 SAN DIEGO—During her lengthy career in the mortgage industry, Teresa Bryce Bazemore has made a number of career transitions—and understood the importance of staying nimble.

Speaking here at the Mortgage Bankers Association’s Annual Convention & Expo, Bazemore—now President and CEO of the San Francisco Federal Home Loan Bank—said her career, which has taken her from Nexstar, Bank of America, Radian and the Federal Home Loan Bank of Pittsburgh, allowed her to evolve, even as the mortgage industry has moved—until recently—at a somewhat slower pace.

A hallmark of Bazemore’s first seven months at the San Francisco FHLB has been the Racial Equity Accelerator Program, a program aimed at breaking down barriers to homeownership at the most basic levels.

“We’ve been looking for ways to make advances in the homeownership gap,” Bazemore said. “Every time we took positive steps, something would happen to push it back. This is a program that allows us to keep pushing forward.”

“I harken back to when we came out of the financial crisis, in which we moved too far in one direction and then overcorrected,” Bazemore said. “We wondered if we would ever be able to get back to allowing the 3 percent down payment mortgage. It took a lot of work and a lot of data to show that 97s perform just as well as 95s.”

Digital collateral is another passion of Bazemore’s; the San Francisco FHLB launched its first eNote program earlier this year.

“The consumers love it; it’s an easier process; and it enables the homeownership process,” Bazemore said. “It’s consistent with what the GSEs do, so there is a consistency there, and we’ve worked with MERS for consistency as well. The adoption curve has not been that strong yet, but we expect that to improve as more lenders make changes to their systems.”

“The ability of the mortgage industry to quickly move to modifications was a bright spot,” Bazemore said. “A lot of things got worked through and done well. We are now well-positioned for the future. Having said, that, when you talk to housing counselors, we still see people who are in trouble. There is a disconnect out there; and there’s still a need to do more outreach and education about the path forward.”

As a result of the shift in the mortgage industry, and the rise of independent mortgage banks, membership in the FHLBs—largely, depository institutions and credit unions have declined.

“We have to be able to expand our system in such a way that satisfy regulators’ concerns about risk,” Bazemore said. “Part of it is understanding those risks and ways to address those risks.”

As for the bigger picture, “We have to decide more broadly how we think about housing America,” Bazemore said. “It has to be done on a global basis—cities suburbs, rural areas, tribal areas. We want to help people become homeowners, but we don’t want a repeat of what happened during the Great Recession—getting people into homes, only to see them lose those homes. It’s important that we bring these people along, educating them. We all have a role in helping make that happen, and we have to believe it’s possible and make it happen.”